With eye on Toshiba, SK chief flies to Japan

With eye on Toshiba, SK chief flies to Japan 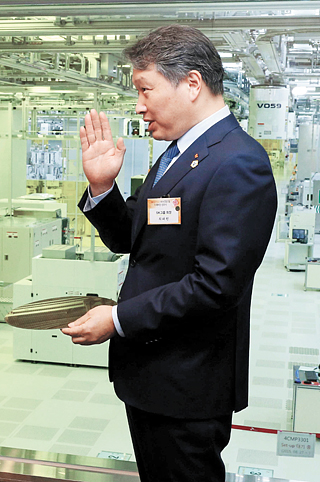 Chey traveled to Japan on a fact-finding trip as he has shown keen interest in bidding for Japanese computer chip manufacturer Toshiba, according to an SK official.

Chey “believes the answers are in the field,” the official said. “And he decided to find those answers [through his trip].”

In the fourth quarter, SK Hynix, reported a record-breaking operating profit of 1.54 trillion won ($1.36 billion) largely on the backs of growing demand for memory chips.

The market expects SK Hynix’s operating profit to further expand to the 2 trillion won range in the first two quarters and by the end of the year to 10 trillion won.

While SK Hynix is enjoying a robust performance, its weakest area has been the NAND flash. In fact DRAM chips account for 72 percent of SK Hynix’s revenue while NAND (nonvolatile storage) flash takes up just 25 percent.

SK Hynix is the world’s second-largest DRAM manufacturer after Samsung Electronics. When it comes to NAND flash, it ranks fifth.

“If SK Hynix succeeds in acquiring Toshiba, it will definitely secure second lead while getting that much closer to No.1 Samsung Electronics,” said Ahn Ki-hyun, executive director at Korea Semiconductor Industry Association. “On the other hand if the company fails to do so, it will face difficulty in taking the lead in NAND flash.”

The recent surge of NAND flash has led Chey to focus on Toshiba.

According to market research company IHS, the global NAND flash market last year was $36.3 billion. That market is expected to expand to $46 billion by 2020.

Unlike DRAM, NAND flash sales are not bound to specific devices and therefore are less sensitive to the market changes. In the case of DRAM, as it is installed on the CPU, only a single DRAM chip is installed for each smartphone. Therefore, DRAM sales fall when smartphone sales drops.

But NAND flash is less sensitive as it depends on the growing demand for storage space, including expansion of data servers and portable hard drives.

“One of the examples is the case where consumers are separately buying micro SD cards to meet the growing data usages on smartphones,” said Song Yong-ho, electronic engineering professor at Hanyang University. “It is likely that the NAND flash will grow much steeper than that of DRAM.”

SK Hynix, which is working with a Japanese financial investor, is said to be pushing to collaborate with American computer chip developer Western Digital.

“It is said the core management of SK Corp., which is in charge of the acquisition, recently met with the management at Western Digital where they proposed cooperating [in the acquisition of Toshiba],” said an SK official, who requested anonymity due to the sensitivity of the deal.

“There’s a possibility that Chairman Chey could be contacting Western Digital Chief Financial Officer Mark Long during his visit in Japan,” the official said.

Western Digital holds the key in the acquisition of Toshiba as it has jointly operated a semiconductor plant with the Japanese company in Yokkaichi, Mie Prefecture, since 2000.

In the last 17 years, Western Digital has invested 1.4 trillion yen in the plant.

Western Digital has demanded an exclusive negotiation with Toshiba citing an agreement where selling the chip unit without the consent of Western Digital would be a “serious” contract breach.

Sources say there’s a strong possibility that SK could be pitching a joint cooperation with Western Digital by putting forth the company’s 3D NAND flash development capacity, which has risen recently as the next-generation technology.

However, the bid for the Toshiba chip unit is growing complicated with reports that the Japanese public-private fund is trying to reach out to Western Digital.

“Considering that the price tag exceeds 20 trillion won, it wouldn’t be easy for a single company to participate in buying Toshiba all alone,” said Song, the Hanyang professor. “Instead of trying to figure how much the company would pay by joining forces with other companies, it would be better to convince Toshiba and the Japanese government as to how [SK] would be raising the company [after it acquires it].”

The bid for the semiconductor sales of the Japanese companies is due next month. This is the second try. In the first bid, Taiwan’s Foxconn, formerly known as Hon Hai Precision Industry, was said to have offered 3 trillion yen for the Japanese semiconductor business. However, the public was opposed to selling a major Japanese business to a Chinese company.