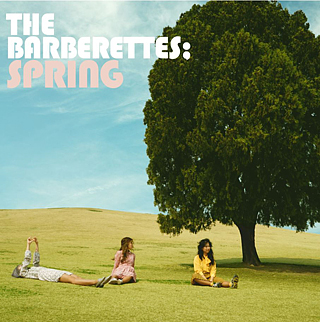 It’s hard to define The Barberettes’ musical genre with one word. The harmonic trio is often referred to as a “time-travel group,” singing doo-wop which has its roots in African-American barbershop music, while some choose to refer to the trio as retro, but none of the above truly captures the distinct sound and identity of the indie group. The Barberettes’ style isn’t only influenced by western culture, as their music is also reminiscent of Korean folk songs of the mid-20th century.

The album “Spring,” released as the first installment of the group’s year-long project to make music for each season, has The Barberettes doing what they do best - harmonizing and arousing nostalgia. The four-track EP consists of two original songs and two covers that capture the essence of the season. The original song “Spring, Bear,” starts off with the group singing in a capella supplemented only by a minimal backdrop. The distinctively different voices blend beautifully, illustrating the characteristics of spring in its essence, with witty lyrics that liken the singers to a bear that has just finished its hibernation.