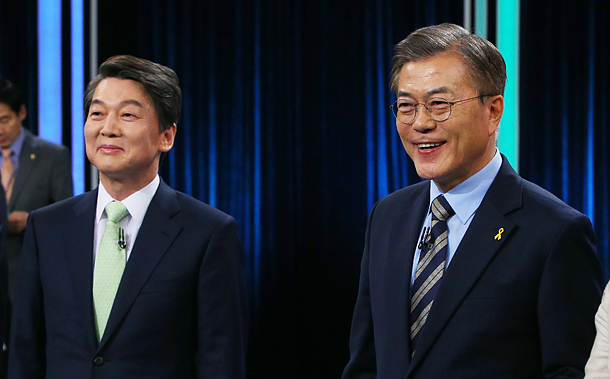 Support for People’s Party nominee Ahn Cheol-soo, which weeks ago put him right behind frontrunner Moon Jae-in of the Democratic Party (DP), is draining away, the latest survey shows, with Election Day just two weeks away.

In a poll conducted by the JoongAng Ilbo on Sunday and Monday, Moon was solidly leading with 39.8 percent support, followed by Ahn with 29.4 percent, a 10.4 point gap.

Hong Joon-pyo of the Liberty Korea Party (LKP), who is campaigning as a “real conservative” with a hawkish stance on North Korea, came in third with 11.7 percent, a 4.3 point increase from the last poll.

Hong was followed by minor progressive Justice Party’s Sim Sang-jeung with 5 percent. Bareun Party nominee Yoo Seong-min came next with 4.4 percent. Yoo is facing calls even within his own party to drop out.

But Ahn’s approval dropped 7.9 percentage points this week, reversing Ahn’s momentum amid a myriad of allegations of unethical conduct of relatives of the two frontrunners.

The biggest problem for the Ahn campaign, however, is a draining away of support by conservative voters over the past week in the wake of unimpressive performances by Ahn in debates and attacks by the two conservative contenders, Hong and Yoo, on Ahn’s position on North Korea.

The poll showed that conservatives who once said they supported Ahn are now finding LKP’s Hong attractive enough to support, boosting Hong’s support by 4.3 percent while dragging down Ahn’s by 7.9 percent.

“Many conservatives flocked to Ahn’s side just to stop Moon from winning,” said Yeom Mi-ae, deputy director of the research team at the JoongAng. “But now they appear to have opted for Hong apparently affected by [Hong’s] ideological offensive.”

In the debates, Hong came across as most hawkish on North Korea, a stance favored by national security-conscious conservatives. Asked in the first debate what he would do if the U.S. showed an intention of attacking North Korea’s nuclear facilities, Hong said while it was important to prevent a pre-emptive strike by the U.S., he would order a special military mission to take over the North in case the U.S. strikes.

Moon has the highest level of loyalty. Of his supporters, 77.3 percent said they would continue to endorse him, putting him on top in the fidelity category. Of Hong’s supporters, 74.4 percent they would keep their support for him, a surprise given Hong’s low approval rating.

Of Ahn’s supporters, 64.2 percent said they would vote for the former businessman till the end. The high level of loyalty among Moon’s supporters appears to reflect his supporters’ determined stand on the left end of the ideological spectrum. The same goes for Hong but in reverse.

“While Moon commands support in the Jeolla region and among liberals, Hong is supported in Daegu and North Gyeongsang, the conservatives’ traditional support base. As the two are positioned on the opposing ends of the ideological spectrum, the level of loyalty among their supporters is higher than for other candidates,” Yoon Hong-bin, professor of political science at Myongji University in Seoul, told the JoongAng Ilbo.

A big variable in the race are three remaining debates. In the JoongAng poll, 20.4 percent of respondents said they thought about changing the candidate they support after watching the debates.

The poll was conducted on 2,000 adults nationwide with a margin of error of plus or minus 2.2 percentage points.