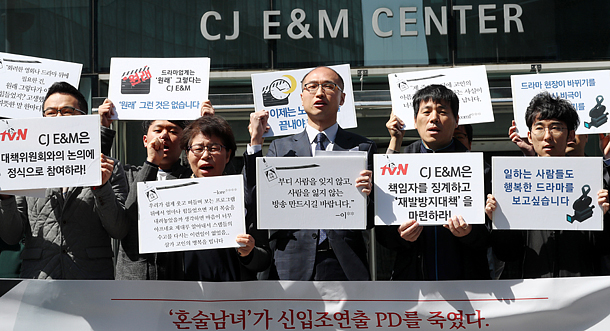 A group of civic activists and relatives of Lee Han-bit, a producer who took his own life last year, hold a press conference in front of CJ E&M Center in Sangam-dong, Mapo District, western Seoul, on Monday, requesting an official apology from CJ E&M and a government response to help prevent other overworked employees from committing suicide in Korea. [YONHAP]

A movement against excessively long working hours is growing after the family of Lee Han-bit, a producer at CJ E&M who took his own life last year, released his suicide note last week, in which he lamented having to work over 20 hours per day.

“I couldn’t live this way, working over 20 hours a day, sleeping only two to three hours and then going back to work,” Lee, assistant director of tvN’s drama “Drinking Solo,” wrote before committing suicide last October. The family released the note on April 18.

A group of civic activists and relatives of Han have started an online petition since his death, requesting an official apology from CJ E&M and a government response to help prevent other overworked employees from committing suicide in Korea.

In its statement on April 18, CJ E&M said, “We are sad for the death of Lee and mourn with the family.” It said it will submit to a police investigation should there be one.

“We have received nearly 10,000 signatures and over 100 cases reported online about how people were enslaved to work with unending labor hours or unfair labor practices,” said Kim Young-min, a policy director of the Youth Community Union.

One such report detailed how a man in his 20s was asked during an interview with an IT company a few days ago, “Do you see the employee behind you working at the office? That guy has been working for 25 hours now. What do you think about that?”

“I used to work from 7 a.m. to 1 or 2 a.m. the next morning when I first started working,” said a 30-year-old surnamed Lee in another post. “Looking back now, I don’t know how I was able to do that, and I still can’t understand why I had to do that.”

“Some job advertisements say in the details for their requirements, ‘We welcome applicants who love eating dinner with coworkers at the corporate cafeteria,’” wrote a 27-year-old surnamed Hong. “That’s not funny.”

There is even a webtoon series about the horrible labor conditions of some young adults here.

Called “Pushover,” the series details the life of a new employee who endures all types of unfair labor practices to be promoted from a contracted employee to a salaried employee in six months. After six months, the company still does not hire the female protagonist as a salaried worker despite their contract.

“This is my life story,” one reader posted in response to one episode of the series.

Koreans work on average 53 hours a week, according to a survey by employment website Job Korea on Thursday. The working time regulations here limit the working hours to 40 hours a week. Some 76 percent of those surveyed said, “my working hours are too long.”

Activists are calling for more detailed policy proposals from presidential candidates to improve the working environment of young adults, instead of focusing only on job creation.

“The presidential candidates need to pay more attention to what the working young adults need,” a group of some 20 young adults unions and civic groups said in a statement. “Instead of calling for a one-sided policy like creating some hundreds of thousands of jobs, they must listen to some of these struggles and come up with specific and diverse policies to address them.”