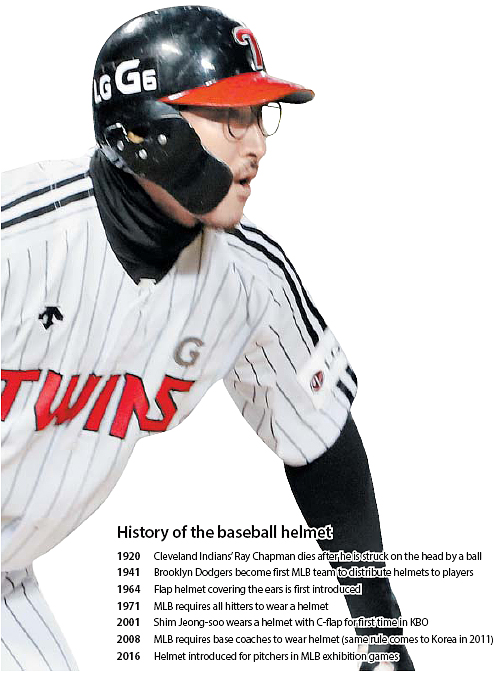 In 2001, outfielder Shim Jeong-soo, who was playing for what was then the Hyundai Unicorns in the Korea Baseball Organization, turned heads when he took to the field wearing a helmet that looked more like gear for a gladiator than a baseball player.

Shim’s helmet covered not only the top of his head but also his left cheek up to the jaw. The outfielder started wearing the helmet after he was hit in the face by a baseball earlier in the season and injured his cheekbone. For added protection, Shim decided to attach a piece of plastic to his regular batting helmet.

After Shim retired in 2008, the face-guard-fitted batting helmet was not seen in the Korean major league for a while. But starting this year, a handful of players, including Choi Joon-suk of the Lotte Giants, Na Ji-wan of the Kia Tigers and Choi Jae-won and Park Yong-taek of the LG Twins, are bringing it back.

Like Shim before him, Choi Jae-won was hit in the face by a ball while playing for the Samsung Lions in August. It was a particularly hard lob. The pitch fractured his jaw, and he had difficulty eating during his recovery.

After he transferred to the LG Twins in December 2016, Choi fitted his batting helmet with a C-flap face guard.

“It was a big shock when I was hit in the face by a baseball,” Choi said. “It might seem like I’m afraid of the ball, but my priority is to prevent injuries.”

“Many say it covers my view because it covers the chin, but it actually helps me focus better,” he added. 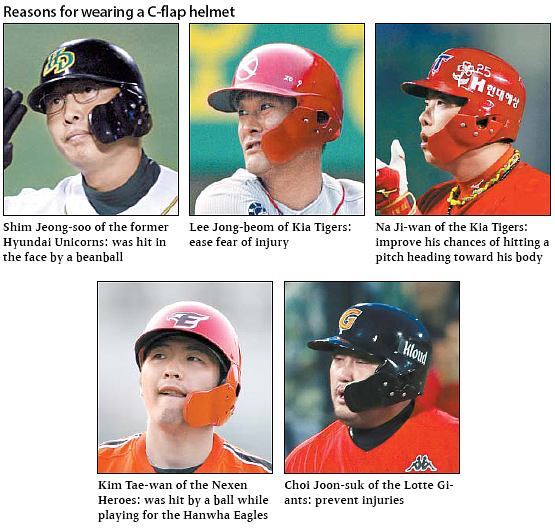 It’s not unusual for major-league players to wear a C-flap helmet. Giancarlo Stanton of the Miami Marlins and Jason Heyward of the Chicago Cubs both started wearing the helmet after they sustained injuries to their face.

In 2010, Cho Sung-hwan, who was then playing for the Lotte Giants, was hit on the head by a ball and was treated for dizziness but chose not to modify his helmet.

“I felt like pitchers were going to throw more balls toward my body if I started wearing that helmet,” Cho said. “Through mind control, I got rid of my fear.”

Other former KBO players such as Lee Jong-bum, Cho Dong-chan and Kim Tae-wan wore face guards for a short period of time but switched back to regular helmets for similar reasons.

But recently, more players are changing their mind-set and wearing C-flap helmets to prevent injuries and improve their play.

Although Park Yong-taek was never hit in the face by a baseball, he started wearing the helmet as a pre-emptive measure. “The pitchers are pitching closer to the batters’ body,” Park said. “It was a decision to minimize injuries.”

While some scoff at the idea of a baseball helmet that covers the face, it wasn’t too long ago that players dismissed helmets altogether. In 1920, Ray Chapman of the Cleveland Indians died after he was struck in the head by a beanball from Yankees pitcher Carl Mays, but even after the incident, players still refused to wear helmets, calling it an accessory that “only cowards wear.”

The Brooklyn Dodgers, now the LA Dodgers, were the first to give out plastic helmets to their players, and the practice spread throughout the major league until wearing a helmet in the MLB became a requirement in 1971.

Coaches, too, have been required to wear helmets in the field after minor-league Tulsa Drillers coach Michael Coolbaugh died in 2007 from a line drive while standing in the first base coach’s box.

Not only that, many voices in the major league are saying pitchers should also wear helmets during games.