Sakers’ Hyun returns to his old team as coach

Sakers’ Hyun returns to his old team as coach 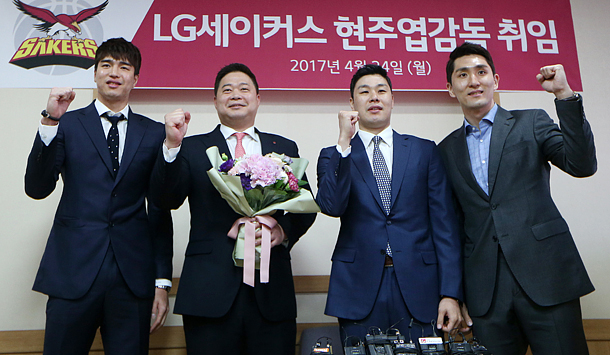 After eight years away from the court, Hyun Joo-yub is returning to the Korean Basketball League as head coach of his former team, the Changwon LG Sakers.

“There was no reason for me to hesitate,” Hyun said during the inauguration ceremony on Monday.

Although Hyun does not have any experience as a head coach, through his playing and sports commentating career, he hopes to transform the Sakers into a top team and improve their offensive and defensive skills in the upcoming season.

“During my time as a KBL player, I thought I played enough basketball and would not have any regrets after retirement,” Hyun said. “But after I retired, I felt a sense of regret, and since I’ve had close relationships with the secretary general and president of the Sakers, when I got the offer, I accepted it right away.”

Hyun is the Sakers’ seventh head coach. The team won the regular season in 2013-14 and advanced to the postseason the following year, but since then, they have been struggling to remain at the top. For the past two seasons, they have finished eighth.

With Hyun as their head coach, the Sakers hope to once again reach the postseason.

“I want to be a coach that communicates with the players and harmonizes the team,” Hyun said.

Hyun debuted in the KBL in 1998 after he was drafted by the Cheongju SK Knights, now the Seoul SK Knights. Before joining the Sakers in 2005, Hyun played for Gwangju Gold Bank and Busan KTF Sonicboom, now Busan KT Sonicboom. During his four seasons with the Sakers, Hyun played in 197 games and retired in 2009.

Even before his KBL career, Hyun was a well-known figure in college basketball, where he competed for Korea University. Standing at 1.95 meters (6 feet 5 inches) and weighing 120 kilograms (265 pounds), he was a big player and had the ability to score and make rebounds with assists. Basketball fans called him the “magic hippo.”

Many former basketball stars from the 1990s have now transitioned into coaching. The average age of head coaches in the KBL is 46.8, and three teams, the Goyang Orion Orions, Ulsan Mobis Phoebis and Incheon ET Land Elephants, have coaches over the age of 50.

Bringing back former basketball stars as coaches has attracted many fans of the old guards, but some also believe it might lower the quality of games because they lack coaching experience.