Waking up after overnight success : Indie darlings Hyukoh release first album after breaking out in 2015

Waking up after overnight success : Indie darlings Hyukoh release first album after breaking out in 2015 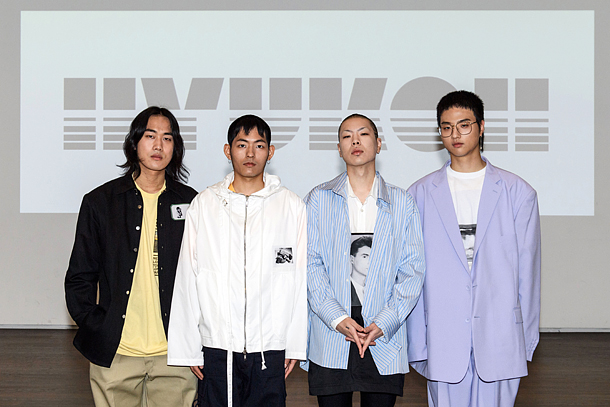 In a music market so focused on the pop sounds of Hallyu, the Korean cultural wave, with music charts that are dominated by the boy bands and idol groups of powerful entertainment agencies, one three-year-old indie band has beat all the odds and become one of the most-loved groups in the industry. After a two-year hiatus, the four-member Hyukoh, followed up their 2014 and 2015 six-track EPs with their first studio album “23” on Monday.

The lead vocalist said, “We worked on this project for two years and have tried hard to put this album together.”

The band came together in 2014 and came up with the name Hyukoh by flipping the order of the lead singer’s surname and given name.

Left: An album listening event was held for journalists on Monday. Right: The album cover for “23,” Hyukoh’s first studio album. Artist Noh Sang-ho is the creative director behind all the visuals for the album. [DRDRAMC]

Oh’s influence in the band cannot be understated. The raspy-voiced singer was the catalyst for attracting the others to the collective. The first EP “20,” was a sole project by Oh aided only by drummer Lee. The second EP “22” was the first release for the band as a whole and “23” is their opportunity to solidify their identity.

The 12-track “23” comes after a string of successes for Hyukoh. With humble beginnings in 2014, the collective started off playing at small stages near Hongik University, like many budding bands before them. Through word of mouth, the group gained a solid reputation in the underground indie scene.

The band’s unexpected break came when the group was featured on the nation’s favorite variety show “Infinite Challenge” in 2015, which quickly sent songs from their two EPs up the charts.

“We were really lucky to garner fans and interest from the public - we could never even dream about the possibility,” said Oh. Although he showed gratitude for the new-found interest, he said there were two sides to the coin. “Of course there was a lot of pressure and burden due to our sudden rise in popularity.”

Oh claimed he and the band members went back and forth on the concept of the album.

“The album was initially devised three years ago, when we first formed our group. The two EPs unexpectedly met many fans. That is why we dwelled on whether to cater to the newfound audience or carry on our existing style for our studio album.”

The band decided to carry on with their original message and concept because they “wanted to finish off what they had started before heading into a new direction.”

The message that the band wanted to tell the world was of their perception of the two distinct sides of youth.

“The bright side of youth is that it shines and that it is energetic. However there is also another side to the youth that is depressing. Getting lost in the process is also an aspect of youth.”

Although the theme for the previously released EPs and “23” is similar, Oh said that there is a difference.

“[The EPs] were talking about the depressing side of youth, and did not let my emotions show. Meanwhile, on ‘23,’ I didn’t really hold back my feelings, which shows in the sounds and melodies. It wasn’t my intention to not hold back the feelings - in the previously released EPs I tried to give a message but I didn’t provide a conclusion. This time, I just didn’t know the conclusion myself. I believe it is a reflection of the status quo. I am going through the process of having to find my own conclusion as well.”

The two title tracks of the album, “Leather Jacket” and “Tomboy” are the band’s favorites off the album. Although drummer Lee was simple in explaining that his affection for the song “Leather Jacket” is due to its upbeat rhythm, guitarist Lim and Oh were much more descriptive in their affection to the songs.

“[My favorite tracks are] ‘Tomboy’ and ‘Reserved Seat.’ I believe these songs are the core of the album,” said the guitarist. “With ‘Tomboy,’ we created the standard of the band Hyukoh, while ‘Reserved Seat’ is the physical form of our long-discussed concepts.”

Oh also chimed in with his affection for the two songs. “’Reserved Seat’ didn’t work out, even though we wrestled with the song for days. Then on a rainy day, it just worked out. I think [the process] made this a key song for the album.”

Although the artists are loved nation-wide as well as overseas, the band still cannot explain the reason behind their fans’ interest and affection.

“We still don’t know,” said Oh, “maybe it’s because the lyrics and the mood [of the songs] arouse sympathy. Because we didn’t know why we are loved so much, we just couldn’t set a target audience for the album.”

With “23,” Oh was determined to beat out recent collaborator and current chart-topper, IU.

“We do want to beat IU’s songs and claim the top of the charts.”

On domestic streaming service Bugs, that became the case, as “Tomboy” and “Leather Jacket” came in at first and third yesterday. However, on the biggest domestic music streaming service Melon, “Tomboy” failed to overtake IU, coming in at second, with IU’s “Palette” still reigning at the top spot.

Even with all the interest and success, the band will always stay grounded, according to Oh.

“We didn’t intend to become rock stars or to make a lot of money. Our motto, since the beginning, was to ‘do what we like for a long time.’”