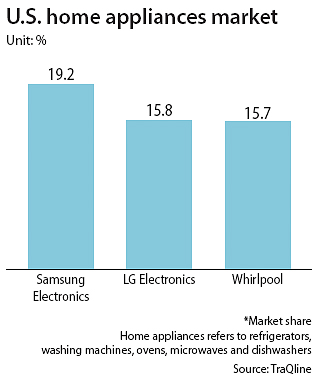 According to market tracker TraQline on Tuesday, Samsung Electronics notched a 19.2 percent market share in the U.S. home appliances market in the quarter that ended in March, followed by local rival LG Electronics, which clinched 15.8 percent of the market. Whirlpool recorded 15.7 percent.

It was the first time the 106-year-old Whirlpool has been knocked down to third place in its home market. It is also the first time the top two ranks in the U.S. home appliances market were held by Korean companies. Samsung took the No. 1 slot from Whirlpool in the third quarter of last year.

The market share rankings were based on sales of five major home appliances: refrigerators, washing machines, ovens, microwaves and dishwashers. Clothes driers are not included, but the Korean companies shares in that category are similar to their shares of washing machines.

Statements from both Samsung and LG stressed the role of premium products and innovations.

“Boosted by the popularity of the AddWash Washing machine, we snatched the top place in U.S. washing machine sales from the third quarter of last year,” Samsung said in a statement Tuesday. The so-called AddWash door enables owners to add laundry during a cycle.