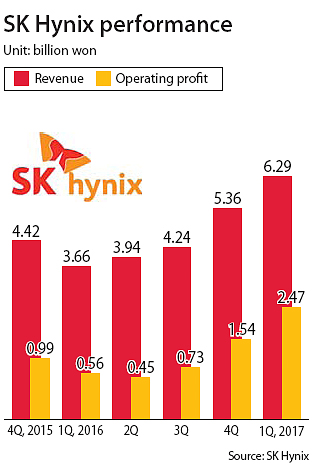 Chipmaker SK Hynix made a record 2.5 trillion won ($2.2 billion) in profit during the first quarter this year, thanks to increased semiconductor prices on the back of growing demand for denser memory chips.

SK Hynix, the world’s second-largest manufacturer of DRAM chips, posted 6.29 trillion won in revenue, a 72 percent increase from last year, and 2.47 trillion won in operating profit, a 339 percent jump, in a company filing Tuesday. Its net profit for the same quarter was 1.9 trillion won, up 324 percent. The results translated to an operating margin of 39.2 percent, the second-highest performance after the second quarter of 2004.

The report was an earnings surprise as the beginning of the year is not typically a high season for chipmakers. Demand for electronic devices containing memory chips usually grows in the latter half of the year when the new school year begins in the United States and sales for Black Friday and Christmas take place.

“Although demand for semiconductors has traditionally been weak in the first quarter, our earnings were boosted thanks to a steep price increase that continued from the end of last year,” the company said in a statement Tuesday. Indeed, though actual shipments of DRAM chips fell 5 percent compared to the fourth quarter last year, revenue increased as the chip’s average selling price rose.

According to data from global semiconductor price tracker DRAMeXchange, the fixed price of 4-gigabit DDR4 modules, a widely-used DRAM chip for personal computers, rose from $1.31 in June last year to $2.75 at the end of February. The price remained stable until the end of March. The price of a 64-gigabyte NAND flash memory chip jumped 59 percent from $2.24 last June to $3.56 at the end of March.

Electronics makers are also increasingly adopting NAND flash chips, a nonvolatile computer storage medium that doesn’t require power to retain data. It has emerged as a cash cow for chipmakers in recent years for its competitive edge over DRAM both in terms of function and cost.

“If demand for memory chips is stable until the end of this year, the company is likely to post 10 trillion won operating profit this year,” said Song Myung-seop, an analyst at Hi Investment & Securities.

According to the company, demand for DRAM chips could grow by roughly 20 percent this year.

SK Hynix is ranked second in the world’s DRAM market and fifth in the NAND market. The company is hoping to expand its strength in NAND with a bid for Toshiba’s NAND business.