SsangYong bets on Rexton to stay in the black

SsangYong bets on Rexton to stay in the black 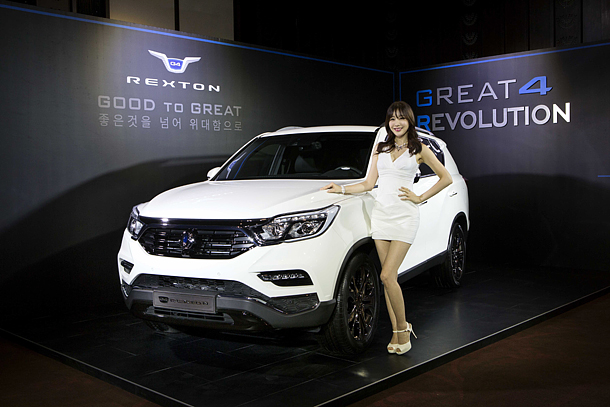 SsangYong Motor began sales of its G4 Rexton sport utility vehicle in Korea on Tuesday, with the goal of selling 20,000 cars this year.

The G4 Rexton was unveiled at last month’s Seoul Motor Show, where it was one of few cars premiering at the event. In the first week after the company began taking preorders on April 17, the 2.2-liter diesel SUV attracted more than 3,500 customers. Deliveries will begin next Monday.

“We have high hopes that our new SUV will help the company continue our sales surplus from last year and contribute to stabilizing management,” the automaker said in a statement.

SsangYong Motor generated net profit last year for the first time in nine years thanks to its subcompact Tivoli SUV.

The G4 Rexton is the latest model in SsangYong’s line of large SUVs. The company is banking on the car to keep it in the black as it sees a growing trend toward bigger sport utility vehicles in the domestic market. The Rexton has a spacious interior, larger than its similarly-sized peers, the company said, and is capable of holding up to four golf bags with five passengers inside.

The front exterior was designed to generate the smallest amount of wind resistance while driving, according to the company, and its soundproofing has been approved by Pininfarina, an Italian car design firm with clients including Ferrari.

The G4 Rexton comes with a system that allows drivers to mirror their smartphone on the car’s center console screen, allowing the driver to use the phone via the monitor. The company boasts it is the biggest car monitor in Korea, at 9.2 inches in width.

In terms of safety, the G4 Rexton is the first SUV made in Korea to receive the highest grade from the Korean New Car Assessment Program, a state-run institute that assesses passenger safety on vehicles. The model’s engine can produce 187 horsepower and 42.8 meter-kilograms of torque.