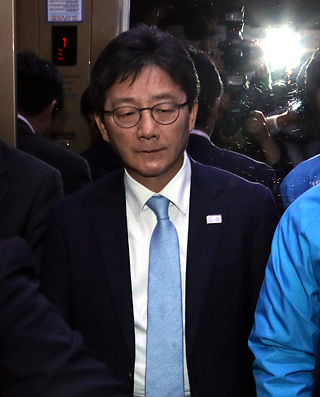 The Bareun Party proposed on Tuesday a three-way merger involving its own Yoo Seong-min, Hong Joon-pyo of the Liberty Korea Party and Ahn Cheol-soo of the People’s Party in order to defeat Democratic Party nominee Moon Jae-in, but their own candidate has already hamstrung the idea.

Moon now leads with a double-digit gap over Ahn, and the three-way merger could reverse this, but would require that Yoo and Hong yield to Ahn, who has the greatest support among them and arguably the best shot at beating Moon, however Yoo and pro-Yoo lawmakers have already come out against the idea.

Emerging from a five-hour Bareun lawmakers’ meeting that ended at 12:30 a.m. Tuesday, party floor leader Joo Ho-young told reporters his party would consider every option to stop Moon, including consolidation with Hong and Ahn.

The proposal is advocated by about 20 party lawmakers close to Kim Moo-sung, a core party member. It is said that those who represent districts in conservative Gyeongsang have been in contact with the Hong camp behind the scenes to unite conservative forces before Sunday, when the election watchdog will print ballots for the May 9 election.

But while the party of 33 lawmakers decided to push for the merger as it struggles to raise its nominee’s approval rating, which has never exceeded five percent in the polls, Yoo reaffirmed his stance on Tuesday that he would run until the end.

“There is no change in my plan,” the former economist told reporters.

Objection to the Bareun Party’s decision persists among their fellow members. Some Bareun lawmakers are said to have contended during the party meeting that forging an alliance with Ahn would still fail to defeat Moon, citing recent polls that show Ahn’s support draining fast.

The idea of forming a political alliance has been floated for some time by those vehemently opposed to Moon’s potential presidency.

But questions remain whether the three parties can simply unite their forces with the election 13 days away for the mere sake of thwarting Moon’s victory, given their ideological differences and history of conflict.

The Bareun Party was launched in January by former LKP lawmakers who were disgruntled with pro-Park Geun-hye lawmakers’ unwavering loyalty to the former president in the days leading up to her impeachment on Dec. 9.

Should the Bareun Party decide to consolidate with the LKP, criticism is likely to flare up that they are returning to the party they once criticized as corrupt.

Whether the LKP and People’s Party will accept the offer is also uncertain. Responding to the proposal, Hong said he was open to forming an alliance with the Bareun Party, but not with Ahn, citing ideological differences.

“There will be no alliance with Ahn, period,” said the LKP nominee, who broke a double-digit approval rating in the latest JoongAng Ilbo poll on Monday, posting 11.7 percent support. “Leaving Ahn alone in the race is most advantageous for us.”

It is also unclear whether the People’s Party will welcome the idea. Sohn Hak-kyu, chairman of Ahn’s campaign team, said in a radio interview with YTN that his party should “think seriously” about forging an alliance in an apparent show of his support for the initiative.

But other members of the party have differed on the matter.

“Our party made it clear a long time ago that there would be no alliance,” said People’s Party floor leader Joo Seung-yong.