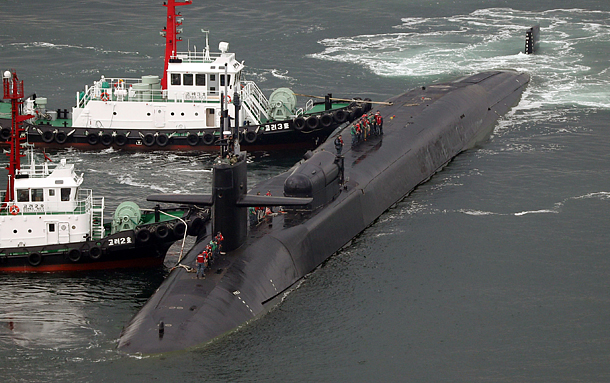 U.S. President Donald Trump on Monday called upon the UN Security Council to prepare for additional and stronger sanctions on North Korea, underscoring he will no longer tolerate the regime’s nuclear and ballistic programs.

In a rare gathering of the 15 UN Security Council ambassadors at the White House, Trump declared that the “status quo in North Korea” is “unacceptable,” amid heightened military tensions on the Korean Peninsula as Pyongyang marked the anniversary of the founding of its army Tuesday.

He added, “The council must be prepared to impose additional and stronger sanctions on North Korean nuclear and ballistic missile programs.”

Washington has said all options are on the table to deal with North Korea. Along with stronger UNSC sanctions, it could impose so-called secondary sanctions penalizing entities engaged in business with Pyongyang. It also desires more robust participation in sanctions by China, including cutting off oil supplies to the isolated regime.

“This is a real threat to the world, whether we want to talk about it or not,” Trump said on North Korea’s nuclear problem in the working lunch with the Security Council, whose permanent members include veto-wielding China and Russia.

“North Korea is a big world problem, and it’s a problem we have to finally solve,” he added. He said, “People have put blindfolds on for decades,” signaling again that the time for “strategic patience” toward the North is over.

Trump has been known to be hard on the United Nations in the past. He called the organization “just a club for people to get together, talk and have a good time” on Twitter last December.

At the luncheon, Trump called the council an “underperformer” but added it has “tremendous potential.”

U.S. Ambassador to the United Nations Nikki Haley, who serves as president of the Security Council this month, said in a press briefing afterward that the meeting was “an open dialogue” and a chance for the members to hear what Trump’s plans are and “what he was going to continue to do” on Syria and North Korea, issues she called “at the forefront.”

North Korea continued saber-rattling as it celebrated the 85th anniversary of the foundation of its Korean People’s Army.

South Korea’s Joint Chiefs of Staff confirmed that North Korea was holding a large-scale live-fire drill off in its Wonsan region on its east coast as of Tuesday afternoon.

Up to 400 long-range artillery and other units were detected as being moved to Wonsan for possibly the largest live-fire exercise to date, and likely to be observed by leader Kim Jong-un.

A front-page editorial in North Korea’s state-run Rodong Sinmun on Tuesday said nuclear weapons that could attack the United States have been deployed to its front lines.

“There is no limit to the strike power of the People’s Army armed with our style of cutting-edge military equipment,” it read, “including various precision and miniaturized nuclear weapons, and submarine-launched ballistic missiles (SLBM).”

Pak Yong-sik, North Korea’s minister of armed forces, said at a commemorative event for the anniversary, “Our nuclear attack methods are in a state of standby putting into target the Asia-Pacific region, U.S. bases and the U.S. mainland at this very moment.”

He went onto warn that Pyongyang is ready for a “powerful pre-emptive nuclear attack” should its enemies opt for military action.

When asked if Washington is truly considering a pre-emptive strike against North Korea, Ambassador Haley emphasized that the U.S. “goal is not to start a fight” with Pyongyang in an interview with NBC Monday, ahead of the Security Council lunch meeting. Haley said that Washington will not engage in military action unless North Korean leader Kim Jong-un “gives us a reason to do something.”

But she elaborated on what that threshold is: “If you see him attack a military base, if you see some sort of intercontinental ballistic missile (ICBM), then obviously we’re going to do that.” She added, “I think then the president steps in and decides what’s going to happen.”

However, she also said that North Korea’s Kim is “trying to get the confidence of his own people,” adding she believes the young leader is “very much feeling the pressure” right now.

Geng Shuang, a spokesman of the Chinese Foreign Ministry, said in a briefing Monday that President Xi stressed in the phone conversation that China “strongly opposes any act that violates resolutions of the United Nations Security Council and hopes that the parties concerned will exercise restraint and refrain from taking any action that will aggravate tensions on the peninsula.”

He added, “Only when the parties concerned shoulder their due responsibilities and meet each other halfway can they solve the Korean Peninsula nuclear issue,” indicating that compromise is needed on all parts.

In addition to Trump hosting the Security Council luncheon, Washington is engaging in a series of diplomatic actions to up pressure on Pyongyang this week.

All 100 U.S. senators have been invited to a briefing on North Korea by Secretary of State Rex Tillerson, Secretary of Defense Jim Mattis, Director of National Intelligence Dan Coats and Gen. Joseph Dunford, chairman of the Joint Chiefs of Staff, to take place Wednesday at the White House.

This would be a rare gathering at the White House of the entire Senate - though it is unclear how many will attend - along with the top foreign affairs, defense, intelligence and military officials.

A similar sort of briefing is reported to be in the process of being arranged for the U.S. House of Representatives, according to House aides, reported Reuters Tuesday.

On Friday, U.S. Secretary of State Rex Tillerson is scheduled to chair a UN Security Council foreign ministers’ meeting on the North Korea issue in New York, an opportunity to discuss full implementation of existing UNSC sanctions as well as new measures in the event of additional nuclear or ballistic missile tests.

Along with the 15 member states, it will be attended by UN Secretary General Antonio Guterres as well as South Korean Foreign Minister Yun Byung-se.

Mark Toner, spokesman of the State Department, said the upcoming meeting will provide the members “an opportunity to discuss ways to maximize the impact of existing Security Council measures and to show their resolve to respond to further provocations with appropriate new measures.”

Cho June-hyuck, spokesman of the South Korean Ministry of Foreign Affairs, said Tuesday in a briefing, “This meeting is the first in the history of the UN Security Council in which a ministerial-level meeting is being convened over a particular country’s denuclearization, and shows the gravity and urgency that the Trump administration and the entire council, including China and Russia, put on the North Korean nuclear issue.”

Yun is expected to emphasize “the need for the Security Council to take pre-emptive action to resolve the North Korea nuclear issue,” he added.

“We view this as reflective of the atmosphere within China that it no longer views North Korea as a strategic asset but as a liability.”

Kim, South Korea’s special representative for Korean Peninsula peace and security affairs, told reporters after the meeting, “We agreed to take strong punitive measures that North Korea will not be able to endure should it fail to halt strategic provocations despite our warnings,” without further elaborating on the details.