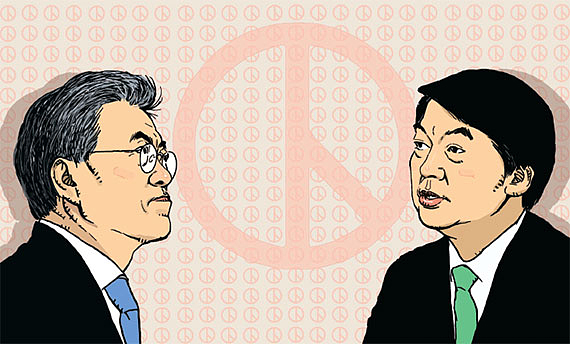 Will Moon Jae-in be our next president?

We can hardly declare the game over just yet. His support is hovering above 40 percent, but it is not likely to go as high as the 48 percent he earned in the 2012 presidential election. As Sim Sang-jeong of the Justice Party solidly holds 5 percent and some progressive votes are going to Ahn Cheol-soo of the People’s Party, Moon’s rating will just skirt the 40 percent mark at most. With the margin of error, he is likely to get 38 to 43 percent. If Hong Joon-pyo of the Liberty Korea Party and Yoo Seong-min of the Bareun Party are stuck at around 10 percent, the 51 percent of the voters who chose Park Geun-hye in the last election may strategically vote for Ahn to vote against Moon and change the outcome of the election.

For now, Ahn’s rating has fallen from 39 percent to 30 percent. But that 9 percent didn’t go to Moon. Hong and Yoo absorbed part of the support, and the rest are undecided. Moon’s rating remains at 40 percent even as Ahn’s rating has been falling for two straight weeks. This demonstrates the limit of his support. Undecided voters will either choose between Ahn or Hong, or end up not voting.

Moon is left with two strategies. The first is to maintain a five-way election and easily win with 40 percent of votes. The other is to continue expanding his base. Notably, he has brought in Rep. Park Young-sun, his opponent in the party, and Kim Deog-ryong and Kim Hyun-chul from outside. But the move could invite criticism for working with the establishment. Kim Hyun-chul had been charged with corruption during the Kim Young-sam administration. The “integrated” administration that Moon is promoting with Kim Deog-ryong could mean an alliance with the rival Liberty Korea Party. While Moon promised he would only work with “healthy” conservatives (those not involved in the Park Geun-hye scandal), the Democratic Party has detested even the non-Park faction as remnants of Park’s reach. Moon may be criticized for pursuing integration while condemning others as a “longstanding evil.”

What keeps Moon apart from other candidates is his focus and tenacity. In order to persuade a former ruling party senior, Moon showed up at a restaurant where he was dining and told him that he would seek consultation on all policy issues. When the senior politician refused, he waited hours in front of his house and sent several envoys to convince him. He was very impressed by Moon’s tenacity.

So how should Ahn approach all this? The key is to secure voters in the conservative region of Yeongnam. They will only choose Ahn because they don’t want Moon to be president. But these conservative voters are now undecided after Ahn failed to show a reliable attitude on security issues during presidential debates. Ahn is hoping to catch so-called shy conservatives on election day as their response rate in polls is only 15 percent and the number of respondents who claim to be “conservative” has drastically decreased compared to the last election.

But Ahn cannot be sure whether the low response rate will benefit him. Instead of just wishful thinking, Ahn needs to create momentum to give hope to voters in the progressive region of Honam as well as centrist and reasonable conservative voters. Although Ahn emphasized a strong image during the primary, he walks a tightrope between the Honam region and conservatives. He is still passive in embracing moderate conservatives. It is natural that he is losing support.

Ahn must secure the Honam region to challenge Moon Jae-in. He must also give hopeful messages to the conservative voters who have grown tired of him. He needs to at least show a willingness to work with the Bareun Party, comprising reformist conservatives who supported impeachment, if he is elected president. When Ahn wins moderate conservatives, Yeongnam voters may return to him
Politics is a balance between ideals and reality. Without a sense of reality, Ahn can never win the hearts of conservatives.