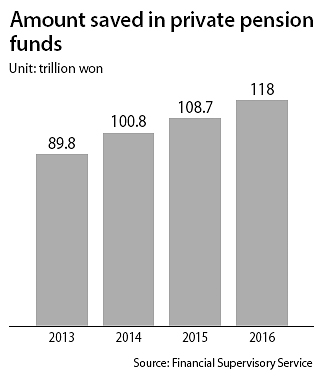 Private pension funds in Korea are one way workers can save for retirement, and they can come with hefty tax benefits of up to 4 million won ($3,500) a year.

Despite the incentives, they remain relatively unpopular. A slow-growing economy and stagnant job market has forced families to tighten their budget and put less into their savings.

Last year, the number of workers that subscribed to a private pension fund stood at 5.57 million, just over 30 percent of the 17.3 million Koreans with jobs, according to data released Wednesday by the Financial Supervisory Service, the country’s financial regulator. The number of new subscribers was 64,000, a 1.2 percent increase from the previous year. The balance on pension funds at the end of 2016 was 118 trillion won, up from 108.7 trillion won in 2015.

Last year, the average annual amount that retirees received from their private pension fund was 3.07 million won. That amounts to about 260,000 won in monthly income, a drop from 280,000 won in 2015. The Financial Supervisory Service estimated that when adding income from the government’s pension fund, which everyone receives, a retiree can get 600,000 won a month.

This is still far below the 1.04 million won minimum that the National Pension Research Institute believes retired senior citizens need every month to sustain a living. It’s an especially dismal picture considering more than half of all retirees in the country received 2 million won or less in pension last year.

While private pension funds can play a crucial part in ensuring a sustainable retirement, the rising financial burden of maintaining the funds has increased the number of people canceling their subscription. Last year, 341,000 people closed their private pension accounts, an increase of 1.6 percent from the previous year. The cancellations were equivalent to nearly 5 percent of those subscribing to the private funds.

It’s all the more surprising because 96.8 percent of people who canceled their subscription faced a 16.5 percent penalty, suggesting the cost of maintaining the fund was higher than simply forfeiting the cancellation fee.

The Financial Supervisory Service said the industry needed to offer more options for retirement saving and should raise awareness of the benefits in preparing early.