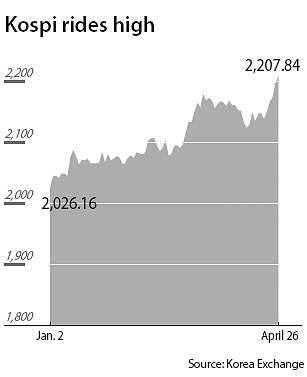 The Korean stock market is on a winning streak.

Seoul’s main bourse, the Kospi, closed at its highest in six years on Wednesday, above the 2,200 mark, and the upswing is generating expectations that the index might even surpass 2,300. The performance is all the more remarkable because it is coming at a time when clouds of uncertainty are looming over the Korean Peninsula with regard to North Korea.

The index ended the day at 2,207.84, up 10.99 points or 0.5 percent from Tuesday. There were already signs early in the morning that the market was going to experience positive momentum, as it quickly entered the 2,200 level soon after trading opened at 9 a.m. and remained around there for the remainder of the day. During the trading session, the index went as high as 2,210, the best performance since May 3, 2011, when the Kospi closed at 2,200.73. Now, it’s in reach of clearing the all-time record of 2,228.96 that was made on May 2 that year.

The gains are a turnaround from gloomy sentiment earlier this year when foreign investors were offloading shares left and right in the wake of tensions between North Korea and the United States. After President Donald Trump demonstrated American military might by firing 59 missiles at an airbase in Syria, Pyongyang responded by test-firing its own missiles.

The dumping by foreign investors earlier this month raised concerns that the Kospi might once again get stuck in limited movement as it has been in the last couple of years.

Instead, the past five days of bullish trading have been led by foreign investors purchasing.

“There have been a lot concerns from investors, including rumors of a major crisis in April, North Korean provocations and the presidential election in France,” said Jeong Dai, an analyst at Meritz Securities. “Rising tension with North Korea has especially affected foreign investors, but it is evident that once these concerns ease, the market will show a strong rebound.”

In fact, after the first round of French elections that put provocateur Marine Le Pen in second, the market started heading upward. Investors felt at ease since the conservative Le Pen has been campaigning for France’s exit from the European Union. On top of that, North Korea has not conducted a nuclear test so far this month, which has usually been the case around April, when the country celebrates several landmark anniversaries.

But perhaps the biggest factor was Korean companies’ first-quarter performance, which turned out to be better than market consensus. Samsung Electronics, the nation’s largest conglomerate, made its second-largest quarterly operating profit of 9.9 trillion won. The company has still had to deal with the fallout from its botched Galaxy Note7 device last year.

Other companies like chipmaker SK Hynix reported record operating profits, and while Hyundai Motor, the country’s biggest automaker, saw a slight drop in profit, it still managed to perform better than what the market had expected.

Seoul’s main bourse was not the only stock market riding high this week. The Nasdaq ended on Wednesday at 6,031.91, up 41.67 points or 0.7 percent from the previous trading day. Earlier on Monday, the index cleared the 6,000 mark for the first time, the biggest milestone since reaching 5,000 points 17 years ago. Investors are expecting gains from the Trump administration’s proposal to trim corporate taxes from 35 percent to 15 percent.