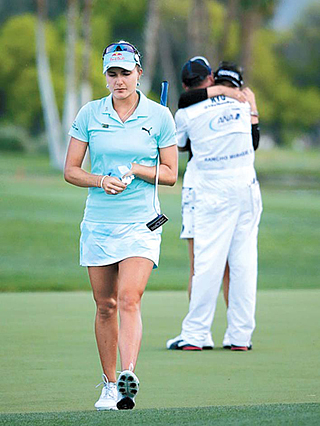 Lexi Thompson of the United States, walks off the green after losing in the first playoff hole to Ryu So-yeon at the ANA Inspiration on April 2. [LPGA]

After Lexi Thompson lost the 2017 ANA Inspiration to Ryu So-yeon by receiving a four-stroke penalty thanks to an anonymous TV viewer’s report to the LPGA rules official, the United States Golf Association (USGA) and the Royal and Ancient Golf Club of St Andrews (R&A) proposed the “Lexi Thompson Rule” to prevent further incidents like Thompson’s.

Although the new changes to the Rules of Golf are expected to be made in 2019, due to the massive controversy brought up by Thompson’s incident, the USGA and R&A is expected to implement the changes as soon as possible.

“The governing bodies could rule that TV viewers cannot call in rules infractions,” wrote Golfweek magazine. “Alternatively, they could decree that no retrospective penalties can be added once a scorecard has been signed.”

Before the four-shot penalty was given to Thompson, she led the field by two shots in the final round of the ANA Inspiration. However, after Thompson played her 12th hole, the LPGA rules official came up to her and gave her a four-stroke penalty during the final round for what she did wrong during the third round.

She was given a two-stroke penalty for incorrectly marking her ball and another two strokes for signing an incorrect score card. Despite the penalties, Thompson stayed strong in the remaining holes to tie the lead with Ryu, but ended up finishing the tournament runner-up by losing in the first playoff hole. If the penalty was not given to Thompson, she would have easily won the tournament with a four-shot lead.

A similar incident occurred at the 2016 U.S. Women’s Open during the playoff. Anna Nordqvist of Sweden hit a bunker shot, but during her backswing, her club touched the sand, which was only determined through video footage. Once it was confirmed, Nordqvist was given two-shot penalty and ended up losing in the playoff to Brittany Lang of the United States.

With that, now, if a violation cannot reasonably be seen with the “naked eye,” then a player will no longer be penalized, limiting the use of technology in the Rules of Golf.

“We recognize there is more work to be done,” Mike Davis, USGA executive director/CEO, said in a statement, quoted by Golfweek. “Advancements in video technology are enhancing the viewing experience for fans but can also significantly affect the competition. We need to balance those advances with what is fair for all players when applying the rules.”