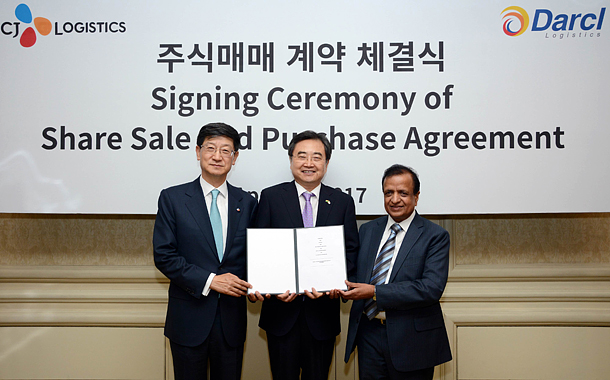 The company formerly known as CJ Korea Express has acquired a 50 percent stake in Darcl Logistics, India’s biggest transport company, and a 51 percent stake in Dubai-based Ibrakom, which specializes in heavy transport. CJ Logistics did not reveal the terms of the deal.

“Both acquisitions are a big step for the company in fulfilling our grand plan to grow into the largest logistics company in all of Asia,” CJ said in a statement.

Established in 1986, the Indian company raked in 320 billion won ($283.7 million) in sales last year and operates 210 centers throughout the country.

India is an attractive logistics market with high growth potential, according to CJ Logistics. The country has the second-largest population in the world with 1.3 billion people and a massive domestic market that generates GDP worth $2.25 trillion a year. Its logistics market is rapidly growing in line with the domestic economy at a yearly rate of 15 percent.

However, the industry itself is not fully mature, as most logistics companies operating in India are small or midsize players doing business on a local scale.

Darcl Logistics is one of few that systematically cover all regions of India with four main bases established in each regional corner.

In the Middle East, CJ Logistics has acquired management rights for Ibrakom, a Dubai-based logistics company with a focus on heavy goods including materials used in oil plants, shipyards and steel mills, which require more advanced transport means.

Ibrakom is the top operator in the Middle East and Central Asia. The company started doing business in 1995 and has since expanded to 21 regional offices in 15 countries. Last year, it made 239.7 billion won in sales.

The Middle East and Central Asia are expected to be profitable markets for CJ Logistics. Oil-producing regions are experiencing a constant rise in demand for heavy materials with numerous factory construction and urban development projects. There’s expected to be even more demand in the wake of lifted economic sanctions on Iran and postwar rebuilding in Iraq.

Within Korea, CJ Logistics was the first company to transport heavy materials and deliver equipment used in major power plants, including Korea’s first nuclear power plant in Kori, Busan. For the past five years, it has been aggressively pursuing mergers and acquisitions abroad in China, Malaysia, Indonesia and the Philippines.

In 2013, CJ Logistics purchased a 51 percent stake in a Chinese logistics company, SmartCargo, which also has strength in heavy transport. Their joint venture, CJ SmartCargo, has a strong base in Asia and Africa.

The acquisition of Ibrakom broadens CJ Logistics’ global portfolio for heavy transport to Asia, Africa, the Middle East and Europe. The Dubai-based company has two logistics centers in Turkey, considered the gateway between Europe and Asia.