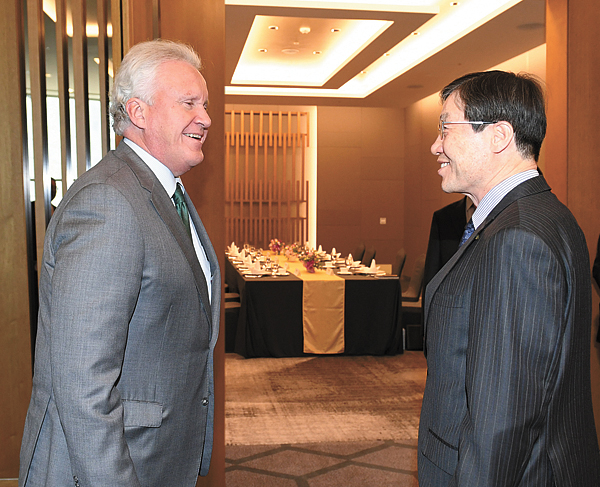 
Posco is preparing for its shift into smart industry. Chairman and CEO Kwon Oh-joon visited Siemens in Germany and GE in the United States to observe their strategies, as these companies have successfully installed smart factories.

He met with Klaus Helmrich and Roland Busch, managing board members of Siemens. In the U.S., he spoke with Bill Ruh, Chief Executive Officer of GE, about business cooperation. On April 13, he met with Chairman Jeffrey Immelt of GE, who was visiting Korea.

Posco recently created an education program for members and executives of the company to train them for the smart industry. The program includes online and offline classes, as well as classes for professionals.

The offline classes intend to familiarize the staff with smart solution technology so that they will be better prepared for the future. The classes are offered to the 5,400 employees of Posco, Posco-Daewoo, Posco E&C, Posco Energy and Posco Chemtech.

The first offline class, which was held for two days starting on April 13, was on smart industry strategies, big data, artificial intelligence and domestic case studies.

Thirty-two executives of Posco Group attended, and other employees will be taking a 3-day course at the end of April.

The course aims to educate the entire staff on the newest smart technologies, technological trends and case studies and prepare them for the future.

Professors from top universities, such as Postech, and professionals from GE and Siemens serve as lecturers. They will present on the fourth industrial revolution, big data, data mining, artificial intelligence, smart factories and Posco smart solutions.

The online course offers classes on smart industry and allows employees the freedom to take the class on their own. There are also advanced classes for those who want to delve deeper into certain subjects.

As the fourth industrial revolution continues and smart factories and digitalization become increasingly significant, Posco plans to ensure that its staff members are familiar with the smart technology. In the future, the company will apply innovative IT technology to its steel business, improving competitiveness and possibly expanding to new business opportunities.

Posco has selected its factories in Pohang and Gwangyang as the trial smart factories. The company applied Internet of Things, big data and AI technologies to the production facilities.

The company has also signed a contract with Postech to train AI professionals. It has chosen 27 experts from each subsidiary and is providing training to each of them.