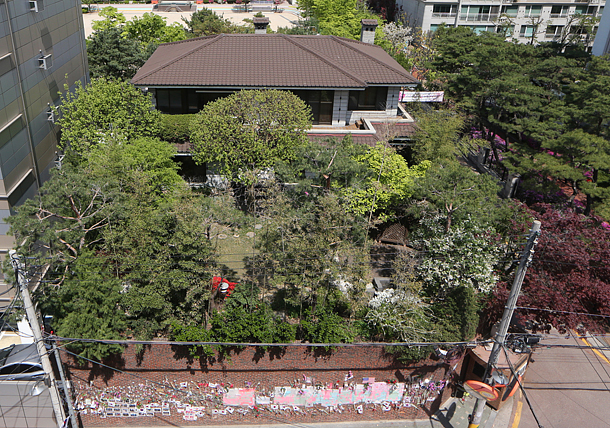 Former President Park Geun-hye’s former residence in Samseong-dong, southern Seoul. Jang Si-ho, a niece of Choi Soon-sil, Park’s confidante, testified in court that Choi told her a large sum of cash was stashed away on the second floor of the house. [YONHAP]

A massive amount of money was hidden at the private residence of former President Park Geun-hye, said Jang Si-ho, a niece of Park’s confidante, Choi Soon-sil, adding that Choi asked her to use the money to take care of Choi’s daughter and grandson.

Jang made the remark in court on Monday during the fourth session of Choi’s trial at the Seoul Central District Court.

Jang testified that she met Choi in an interrogation room of the Seoul Central District Prosecutors’ Office in December after they were both arrested over the bribery and power abuse scandal involving Choi, Park and conglomerates.

The independent counsel, who acts as the prosecution, and Jang revealed in the courtroom that Jang and Choi were questioned together on Dec. 4, 2016, at the prosecution. As Jang burst into tears after seeing Choi, Choi also cried and approached Jang. She tried to whisper into Jang’s ear, Jang said.

As Jang shook her head to express that she could not understand Choi’s words, Choi asked the prosecutor to get water and wrote down a memo using a pen and a piece of paper. “Samseong-dong 2nd floor room,” and “Yoojoo kindergarten,” Choi wrote. Yoojoo is the name of Choi’s grandson, and Park’s private residence is located in Samseong-dong, Gangnam District, southern Seoul.

Jang said she drew a question mark because she could not understand Choi’s memo, and Choi asked the prosecutor for water one more time. She then hugged Jang and whispered, “Listen carefully. There is money in the room on the second floor of Samseong-dong. Manager Bang has the key. Use the money to take care of Yooyeon and Yoojoo.”

After the prosecutor came back, Choi once again asked the prosecutor to get Jang some water. Choi told Jang the security guard at the Samseong-dong house will open the door if Jang tells him that she came on Choi’s orders.

“I do not know if the money belongs to Park or Choi, but Choi almost always used cash, so I thought cash was kept at the Samseong-dong residence,” Jang said. “Because she told me to raise Yooyeon and Yoojoo with the money, I thought it would be a large sum, at least hundreds of millions of won.”

While Jang did not know the exact amount, she later told the independent counsel about Choi’s remarks.

“Choi told me the money at the residence was enough for a whole life,” an official from the independent counsel told the JTBC, quoting Jang. “A safety box is located on the second floor of Park’s house, and the money is probably there.”

The independent counsel considered raiding the house, but did not do so because there was a high possibility that Choi would have already asked her associates to remove the money.

A source from the independent counsel team also said the timing was inappropriate and it was unclear if the money was within the scope of the investigation. Park was impeached in December, but she was still president when the investigation took place. The independent counsel probe ended in February and the Constitutional Court formally removed Park from office on March 10.

Park sold her Samseong-dong residence at the price of 6.75 billion won and purchased another house in Naegok-dong, Seocho District, southern Seoul, at the price of 2.8 billion won. “The house, built in 1983, is fraying. And the neighbors had to undergo many inconveniences, so we decided to move to a less crowded area,” said a Park aide.

During the court session on Monday, Jang also testified that Park and Choi were extremely close. “My aunt and the president were inseparable, and their tie was beyond the imagination of ordinary people,” she said. “Choi managed the Samseong-dong residence and paid for the maintenance costs.”

She also said Park was called “big mommy” in her family. “Not just me, but all my family members called her ‘big mommy’,” Jang said.