Sales of gas for cars choked off in Pyongyang

Sales of gas for cars choked off in Pyongyang 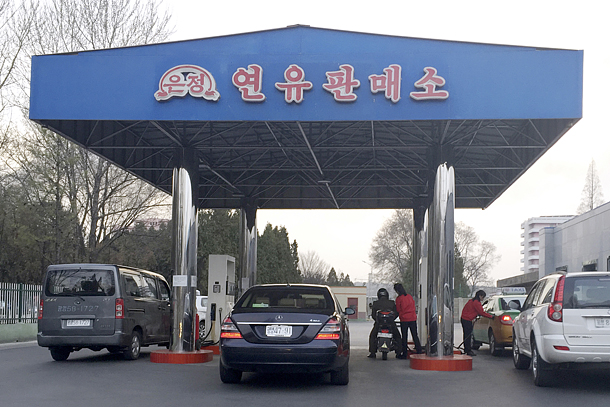 Car users in Pyongyang are scrambling to fill up their tanks as gas stations limit services and close their gates amid concerns of a possible shortage. The cause of the restrictions or how long they might last were not immediately known. [AP/YONHAP]

BEIJING – Gas stations in Pyongyang are not opening for business and reports are circulating of a drop in the number of cars on the streets of Pyongyang, sparking speculation that North Korea is stockpiling fuel in preparation for a suspension of Chinese supplies.

“I didn’t feel it last week, but within two days Pyongyang’s traffic definitely decreased,” said a foreign reporter in North Korea via text message to a JoongAng Ilbo reporter. “Though all the gas stations I’ve seen have closed their doors, there’s talk of some still being open in certain locations.”

China Central Television (CCTV) broadcast a correspondent’s report on fuel shortages in Pyongyang on Tuesday.
“When I went to the gas station in the foreigners’ residential area on April 19, they did not refuel any cars except for diplomatic vehicles,” said Zhao Miao, a CCTV correspondent based in Pyongyang. “At that point, other gas stations were doing regular business, but as time passed, there were more gas stations restricting the quantity of fuel or even shutting down. Foreigners are traveling around the city in order to buy gas in emergency gas cans. At one gas station, queues for gasoline stretched one kilometer (0.6 miles). After fuel quantities were limited, gasoline costs started to climb and a gas coupon that one could originally use for 15 kilograms jumped 70 percent from 90 yuan (14,700 won or $13) to 160 yuan.”

“I don’t know why this situation developed or how long it will last,” said Zhao.

However, a reporter visiting North Korea to cover the Day of the Sun, the birthday of founder Kim Il Sung, said, “I didn’t notice a significant difference on the roads when I entered Pyongyang on [April] 10 and returned on [April] 22.”

There has been no official announcement of restrictions on gasoline purchases. One hypothesis is that North Korea is stockpiling fuel in advance of a sixth nuclear test, preparing for a cutback in crude oil supplies by China.

“It’s almost certain that China is pressuring North Korea with the crude oil card,” a diplomatic source in Pyongyang said. “We only know that there still hasn’t been a suspension of supplies.”

“There’s a chance that the halting of sales by gas stations results from panic buying in preparation for gasoline shortages,” said one specialist on North Korea.

It’s also possible that the city is suffering a temporary shortage because of a snag in the oil refineries or particularly steep demand by the military.

But long-time foreign residents of Pyongyang said they can’t recall any similar situation in the past.

“There was a time when gas station operations were temporarily halted right before a gas price hike, but there was never a case where it lasted a week,” said one Chinese national.

One Chinese reporter said, “In the three years I’ve worked [in Pyongyang], there was never a single instance in which I could not fill up at a gas station.”

According to official statistics from Chinese Customs, crude oil exports to North Korea from China since 2014 were zero. But they are misleading.

Chinese President Xi Jinping, infuriated with North Korea for pushing its 2013 third nuclear test, threatened a total suspension of oil exports to North Korea, and that is reflected in the customs statistics. But China continued to provide North Korea with petroleum through various channels.

According to multiple sources, North Korea consumes 1 million tons of oil a year. “China provides 530,000 tons a year with a special one percent low-interest loan, and in the end it writes off the sum so it’s no different from a grant,” a source said. “It is estimated an additional 200,000 tons of refined oil such as gasoline is also provided.”

It is thought that North Korea imports tens of thousands of tons of refined oil products from Russia and countries in Southeast Asia. The source said supplies from Russia made up for Chinese supplies that were reduced from 2014.

If petroleum imports were cut for just three months, it would be hard for North Korea to withstand it,” a South Korean government source said. “There’s a feeling that China will raise the issue of considerable restrictions on oil exports, even if they are not stopped completely.”