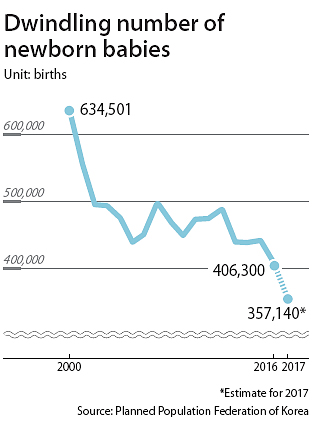 The estimated number of newborn babies this year will be about 360,000, the lowest ever, the Planned Population Federation of Korea said Tuesday.

According to the federation, a non-governmental organization, 110,710 babies received newborn screening tests from January to March this year. The number is 15,287 lower than 125,997 of the same period last year, showing a 12.1 percent drop.

The newborn screening tests are free-of-charge physical examinations given at all obstetrics hospitals within one week of birth. Blood samples are taken and nine medical organizations run tests. The Planned Population Federation of Korea collects the outcomes and manages the database.

“The newborn screening tests is an indicator,” said an official of the Ministry of Health and Welfare, who spoke on the condition of anonymity. “If the trend of the first quarter continues till the end of this year, the number of newborns for this year will drop to the level of 360,000.”

Using the rate of decrease for the first quarter, Korea is expected to have 357,140 newborns this year. Last year, 406,300 babies were born.

The ministry’s statistics also showed that 102,668 applications were filed for the delivery-expenses subsidy and maternity care program from January to March, 7.9 percent down from that of the same period last year.

Other signs are also bad. The youth unemployment recorded the worst-ever 9.8 percent last year, and the number of marriages is also low. Last year, 281,635 marriages were registered, indicating that this year’s number of newborns will likely be low.

Ahead of the May 9 presidential election, candidates promised childcare subsidies, larger amount of current subsidies for home care, better maternity leave program, increases of state-run day care centers and cash incentives for having a second child. Pledges, however, did not come with solid funding plans and their feasibility is questionable.

“The extremely low birth can never be resolved with childcare policies,” said Kim Sang-ho, head of the Korea Institute for Health and Social Affairs. “Housing, education and employment policies must work comprehensively to see some effects.”

He added, “Japanese Prime Minister Shinzo Abe appointed the so-called ‘100 million minister’ in order to fight the population issues. The next president must also have a strong grip on the issue and show leadership to overcome this challenge.”

Abe unveiled a plan last year to prevent the country’s population of 127 million from sliding below 100 million. Katsunobu Kato was appointed to a new minister position in the cabinet to push the program forward.