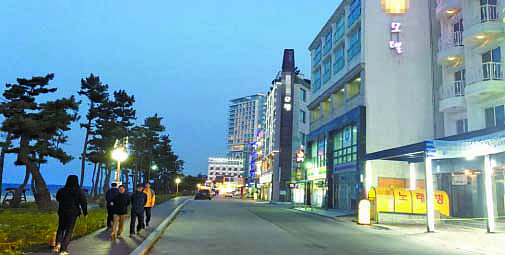 There are less than 300 days until the PyeongChang 2018 Winter Olympic Games (February 9 to 25). The PyeongChang Organizing Committee and the Gangwon provincial government successfully pulled off the test events last winter and have kicked off construction for stadiums and roads. The JoongAng Ilbo has prepared a three-part series covering the Olympic host city and its environs, regarding the accessibility of their accommodations, restaurants and transportation.

An upcoming battle royale for rooms seems to be inevitable as visitors face a lodging shortage for the duration of the PyeongChang 2018 Winter Olympic Games, which will be held from February 9 to 25. As a result, the cost of accommodations such as motels and hotels in the vicinity of the Olympics are skyrocketing.

By comparison, accommodations for the Rio Olympics last year were in the 67,000 to 150,000 won range. The lodging shortfall has sparked the rise of three-room apartments being illegally rented to future visitors for 500,000 won per night, or 15 million won per month.

Yet the number of establishments providing guest rooms in all of Gangneung, Pyeongchang and Jeongsan amount to only 75 locations with 6,649 rooms in all.

This means only 13,000 people can be accommodated. The remaining 47,000 must venture outside the limits of the Olympic event areas to nearby Sokcho, Donghae, Wonju and Hoengseong.

Though the Gangwon provincial government is pushing ahead with plans to have cruise ships docked at Sokcho, even then there will not be enough available rooms.

According to the Gangwon provincial government, there are 246 motels in the Gangneung area.

When reporters visited 20 motels in the vicinity of Gangneung’s Gyeongpo Beach, bus terminal, Gangneung train station and the area of Gyodong on April 11, there were four motels fully-booked for the Olympics, 11 motels still open for reservations and five with no arrangements.

Another motel proprietor said, “I’m waiting for organizations to rent out all the rooms rather than individuals or small groups. Rather than a short period of time, a longer [reservation] until the end of the events on [April] 25 is preferable.”

A third motel owner said, “A group of foreign athletes has already reserved all the guest rooms. They’ve reserved the [whole duration up until April 25] at 380,000 won per night.”

“The hosting areas for the recent Olympics raised their lodging fees,” said a staff member at the Korean Association for Hospitality. “Motels are considering additional expenses, such as increasing the number of beds in each room. Foreign travel agencies are already advertising at 300,000 won per night.”

“Because the lodging fees are so expensive,” said Gil Gi-beom, 34, of Goyang City, Gyeonggi, “I’m making inquiries with bathhouses.”

“Lodging fees are set freely, so there are no legal controls,” said Jeong Mun-jun, an official overseeing operations for the PyeongChang Olympics at the Gangwon provincial government.

“We are instructing them to take fees according to the prices listed. It is important for lodging establishments to recognize that overcharging visitors for the PyeongChang Olympics is wrong.”

“If an outrageously expensive lodging fee is demanded of foreign tourists,” said Kim Kyung-sook, professor of tourism management at Gangneung-Wonju National University, “this will harm Gangwon’s image and fewer people will return.”

She added, “I think it requires the central government’s leadership in a special case such as the Olympics. A guideline on suggested lodging fees is on the way, through consultations with the Ministry of Health and Welfare and the Korea Tourism Organization.”