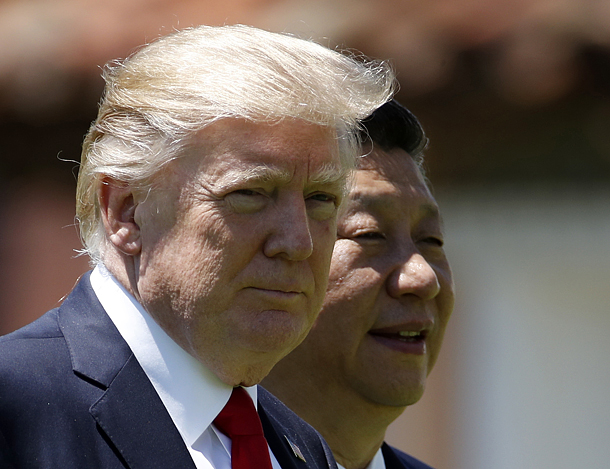 The good days are over. Korea has lost face, China continues to hurt the country’s pride and Chinese President Xi Jinping is saying Korea used to be part of China. U.S. President Donald Trump claims Xi told him this during their meeting in Florida early this month.
Xi’s remark must have left an impression on Trump. “He then went into the history of China and Korea,” Trump recalled. “And you know, you’re talking about thousands of years … and many wars. And Korea actually used to be a part of China. And after listening for 10 minutes, I realized that it’s not so easy.”

Trump changed his perspective in 10 minutes. Why did he respond so quickly? What made Xi’s history lesson so convincing? What did he mean by many wars? Was Trump over-interpreting? The inside story is unknown.

Xi’s remarks are insulting to Korea and his historical views distorted and arrogant, but the Korean government has responded lukewarmly. Foreign Ministry spokesman Cho June-hyuck said in a briefing, “It is an internationally acknowledged historical fact that Korea was not a part of China.”

Xi’s remarks were not even an issue during the presidential debate on Tuesday organized by the JoongAng Ilbo and JTBC. Are the candidates really concerned about China’s stance? What would have happened if Japanese or American leaders made such provocative remarks? All five candidates did not discuss what Xi said.

There was a time when Korea-China relations were good: between 1987 and 1997, right before Korea’s currency crisis. China had envied Korea’s industrialization. “For the 1990 Beijing Asian Games, Korea provided hundreds of copy machines and cars at China’s request,” said Kim Han-kyu, chairman of the 21st Century Korea-China Exchange Association. Back then, Korean tourists were patronizing and pompous, looking down on China. They blew away the ordeals that their ancestors went through.

During that legendary decade, there was tension between Korea and Japan over matters of history. In November 1995, Korean and Japanese leaders met at the APEC summit in Osaka. At the time, President Kim Young-sam put pressure on Japanese Prime Minister Murayama. “President Kim directed me to suggest Chinese President Jiang Zemin enter the meeting room after taking a walk around the garden together,” recalled Park Jin, who was Kim’s communications secretary at the time. “I delivered the message, and Jiang turned to Kim and said, ‘That’s a great idea.’”

The other leaders were already in the meeting room, but the Korean and Chinese presidents took a five-minute walk as a silent protest against Japan’s interpretation of history. Prime Minister Murayama, the host of the meeting, must have felt uneasy while Kim and Jiang were enjoying their strategic stroll.

Diplomacy reflects the status and skill of a country. The world stage is the setting of a play featuring international leaders, and the Korean president invited the Chinese president to join him in the act. It was only possible at that time but unthinkable today. There had never been, and never will be, a better time.

The Korean Peninsula is in a sensitive situation. The nuclear-powered USS Carl Vinson aircraft carrier and Japanese destroyers are engaging in tactical training together. Trump has called the status quo on North Korea unacceptable. Even as China is pressuring North Korea, South Korea is excluded from the discussion. “There is no chair for Korea at the table discussing Korean Peninsula issues,” said Sim Sang-jeong, a presidential candidate from the minor Justice Party.

It is not just because South Korea is in a transitional period and does not have a president. There is disdain and contempt underneath. Whenever North Korea conducts a nuclear test, South Korea begs to China to pressure the North Korean regime. And South Korea relies on its alliance with the United States. Having repeated the cycle, South Korea has earned an image of diplomatic panhandler.

When North Korea conducts a nuclear test, it is our fate that is at stake. But our society is generally peaceful and comfortable in the role of observer. With national unity already weak, the issue of deploying a U.S. missile shield has exacerbated division. China looks down on South Korea, and the United States and Japan are not much different.

Xi’s remarks are symbolic, and the impact will be long-lasting. China’s Foreign Ministry spokesman, Lu Kang, has avoided confrontation. He said the South Korean people don’t need to worry. In international relations, composure, reservation, anger and determination should be properly combined. Otherwise, a country will be brushed aside.