Online movies find an audience: Some struggle to see how web dramas and films are different

Online movies find an audience: Some struggle to see how web dramas and films are different 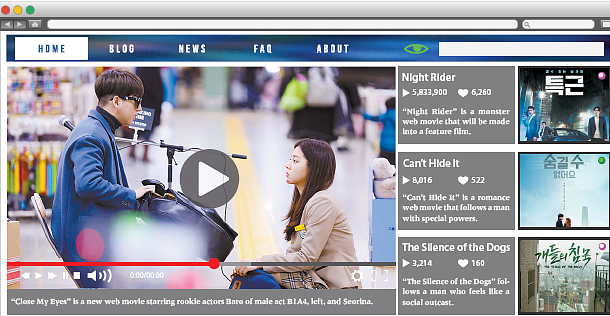 Internet-based content like webtoons, web dramas and web reality shows have become familiar and are well-received by modern, smartphone-reliant audiences. Amid the growing popularity of web-based content, producers have begun to extend their interest to web movies.

Though the term became prevalent only last year, a number of production firms have already rolled up their sleeves to start creating web movies. Usually released on the web in parts, each episode of the film runs between 10 to 20 minutes.

The web movie concept became familiar through last year’s “Night Rider.” The action-packed monster film, starring Kim Sang-joong, Kim Gang-woo and Joo Won, was distributed online in October through Naver TV Cast over four episodes. Each episode ran for around 10 minutes, and the entire series had more than 5.8 million views in total.

In February, YGKPlus, the modeling and acting agency arm of the entertainment behemoth YG Entertainment, announced its plan to boost its web movie project, Directors TV, after positive reviews of its web movies like “Can’t Hide It,” a romance story involving a man with superpowers, and the trailer for the drama “The Silence of the Dogs,” which revolves around a man who feels neglected by society. The latter was unveiled at the 34th Busan International Short Film Festival that will run through Sunday.

And on Tuesday, Titan Platform, the IT company behind digital open market media platform Winvention, unveiled its first web movie “Close My Eyes.” Starring Baro from male act B1A4 and actress Seorina, it is a mystery thriller revolving around a blind busker and a high school girl. Titan is planning to make more web-based movies this year, according to Zang Yeo-zin, a representative from the company.

There is no doubt that this new platform for movies has brought about some positive changes. In the current film industry, where investors’ narrow interest in big budget blockbusters are pushing away opportunities for lower budget flicks, the web functions as a testing ground for films with unusual genres and themes.

“Night Rider,” for example, was a rare example of a monster movie made in Korea.

“Science-fiction monster films are not easy to make in Korea,” said Yun Chang-eop, the CEO of Moon Watcher that produced “Night Rider.” “There are many obstacles in producing sci-fi monster films in Korea due to the underdeveloped technical skills and infrastructure [compared to Hollywood] and because they require a large budget of at least 10 billion won ($8.9 million).”

In order to convince its investors that a monster film could also work in Korea, its producer created “Night Rider” as a pilot film to be unveiled on the web. After proving its potential to investors, a feature film version of “Night Rider” is planned to begin shooting next year.

Web movies also provide a window of opportunity for rookie cineastes, who are usually pushed away by those with more experience.

Rookie director Kim Geon, who was behind the camera of “Night Rider” said that the web movie was a great opportunity for a newbie director like him to practice and test computer graphics and action scenes.

Web movies also provide a chance for actors and crew with less experience to take part in weightier roles, according to Baro, who is playing a lead role for the first time in “Close My Eyes.”

Despite the positives that web movies have provided, there is no agreed definition on what a web movie actually is. In the traditional sense, the main differences between movies and drama was whether they were screened on television or at theaters and the length of the content. However, both web movies and web dramas are unveiled online and both usually release several short episodes over a fixed period of time.

The similarity seems to be giving web movie creators a difficult time in deciding whether it is right to categorize their final product as a film instead of drama.

Kim Sol-mae, who directed “Close My Eyes” said that even though it may seem similar to a web drama, it has been categorized as a movie because viewers have to pay to watch its episodes. According to him, people can watch dramas on television for free, but they have to pay to watch a film at theaters.

Yun from Moon Watcher explained that “Night Rider” is a web movie instead of drama because its sci-fi, fantasy genre is perceived to be closer to film than TV series in Korea. And Yun Seon-gyeong from YGKPlus said that its web contents are categorized as movies because the majority of the staff who worked on the project had previously worked on films.

“Categorizing their projects as web movies instead of web dramas is one of the marketing strategies to differentiate content from web dramas, which are often perceived by audiences to be smaller in scale,” said film critic Kim Hyeong-seok.

“However, it is not wrong to categorize web movies like ‘Night Rider’ as movies because their genres are different from web dramas, which are usually romantic comedies. And [unlike web dramas], in three to four years, web movies have the potential to be screened in theaters if the stories get longer and the content’s [quality continues to] develop.”