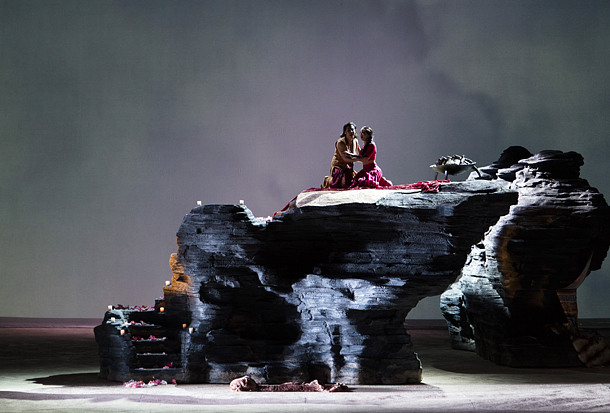 The annual gateway for emerging vocalists and private opera companies, the Korea Opera Festival is back for its 8th year. Sponsored by the Ministry of Culture, Sports and Tourism, the festival, which features both internationally renowned operas and Korean traditional pieces familiar to the public, will be put on stage at the Seoul Arts Center.

“For the development of Korean operas, we are trying our best to make this genre more familiar to the public,” said Jung Chan-hee, the chairman of the organizing committee for the festival at a press conference held at the President Hotel in Jung District, central Seoul on Tuesday.

The festival will kick off with Muak Opera’s “Tosca” by the Italian composer G.Puccini, which is known for following the post-Romantic operatic tradition called verismo (Italian for truth), featuring simple music and lyrical melodies. Film director Chae Eun-seok directs the cold and tragic love story. “I am not familiar with the genre of opera as well, so I hope to make this piece more approachable to the public,” said Chae as this is his first time directing an opera.

Alongside internationally renowned operas, creative operas which show off the humor and satire in Korean traditional folktales and novels such as Grand Opera Company’s “Spring Spring” and “Arirang Nanjanggut” will also be performed. The only non-opera company participating in this festival, Heart Music, a music production firm, will stage “Stubborn Oong,” a family opera that everyone can enjoy.

Sol’ Opera, which received praise at the 6th festival with its production of “Il Trittico,” is back with “Cavalleria Rusticana & Pagliacci.” For the role of Alfio, a bold horseman, baritone Oh Dong-kyu will take the stage.

The finale of the festival will be a performance of the Korea National Opera’s production of Georges Bizet’s “Les Pecheurs de Perles,” which first premiered in Korea in 2015.

There will be outdoor events as well, as well as the Opera Gala Concert, which will be a precursor to the 2018 Pyeongchang Winter Olympics.