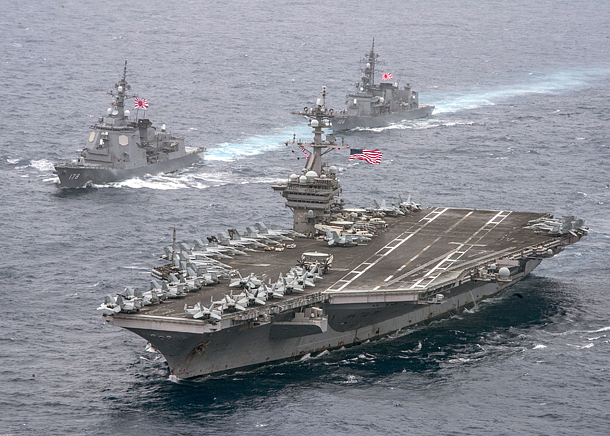 In this April 26 photo released by the U.S. Navy, the aircraft carrier USS Carl Vinson, foreground, transits the Philippine Sea with the Japan Maritime Self-Defense Force Atago-class guided-missile destroyer JS Ashigara, left, and the JMSDF Murasame-class destroyer JS Samidare. The aircraft supercarrier is headed toward the Korean Peninsula for an exercise with South Korea. [AP/YONHAP]

A U.S. Navy strike group led by the nuclear-powered USS Carl Vinson, which local military officials initially said would arrive in South Korean waters by Tuesday, was in the Philippine Sea east of Japan’s Okinawa by Wednesday night, within “striking range” of North Korea, according to U.S. Pacific Command Adm. Harry Harris during a House hearing of the Committee on Armed Services in Washington.

The four-star commander did not specifically mention when the strike group would arrive in South Korea’s East Sea or how long it will stay there.

An official from the South’s Ministry of National Defense said Washington appears to be “weighing the options” on when to deploy its group to domestic waters, and that a key variant was North Korea’s behavior.

Earlier Wednesday, AP reported that Japanese aircraft were integrated with ongoing training by the Vinson’s air wing, adding that the exercise included air training and information sharing to improve joint operation and communication between U.S. and Japanese militaries.

Combined operations between the two countries are known to have started Sunday, when the Vinson strike group arrived in the Western Pacific, according to the Japan Times. The paper quoted a Japanese military official as saying that the participating Japanese destroyers, Samidare and Ashigara, would practice tactical formations and test communications procedures with the U.S. ships during the drill.

South Korean military officials initially told media last week that the Vinson would arrive Tuesday, April 25, which would have coincided with the 85th anniversary of the North’s founding of the Korean People’s Army. Pyongyang has a history of celebrating national holidays with a show of military might.

The North did not fire any missiles or conduct a sixth nuclear test that day, but held a large-scale live-fire drill off its east coast in Wonsan, Kangwon Province. The state-run Korean Central News Agency reported “more than 300 large-caliber self-propelled guns lined up along the coast” and opened fire all at once, calling it its “largest-ever combined fire demonstration of the Korean People’s Army services.”