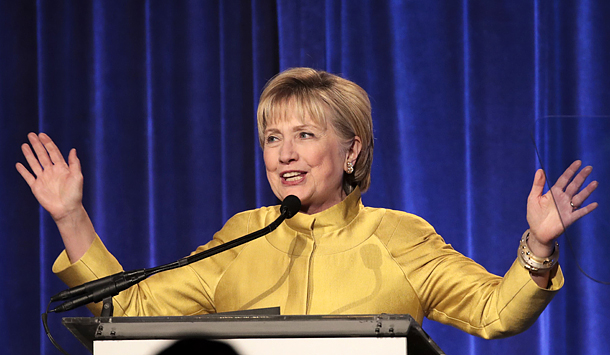 Former U.S. Secretary of State Hillary Clinton said in a paid speech in 2013 that Washington would not accept Pyongyang having an intercontinental ballistic missile (ICBM) that could carry a nuclear warhead since it could “theoretically” target U.S. mainland.

“We all have told the Chinese if they [North Korea] continue to develop this missile program and they get an ICBM that has the capacity to carry a small nuclear weapon on it, which is what they’re aiming to do, we can’t abide by that,” said the former presidential nominee.

Clinton’s remark was made during a speech delivered in South Carolina in June 2013 for the Wall Street firm Goldman Sachs for which she was paid $225,000.

The transcripts of that speech and two others at events hosted by Goldman Sachs were released by WikiLeaks last November but just recently gained attention.

The former first lady cited the potential danger of Pyongyang having mastered the technology for a long-range missile, saying it “could actually reach Hawaii and the West Coast theoretically and we’re going to ring China with missile defense. We're going to put more of our fleet in the area.”

Her remark that Washington would “ring” China with “missile defense” appears to be in line with the quick installation of a U.S.-run missile defense system in Seongju, North Gyeongsang, on Wednesday, which caught many by surprise. Many assumed that the deployment would proceed after the snap May 9 presidential election.

Clinton also weighed in on China’s North Korea policy, saying Beijing does not wish to see a unified Korea as it would be “dominated” by the South Korean government.

Adopting the perspective of Beijing, Clinton said in the speech, “We don’t want a unified Korean peninsula because if there were one, South Korea would be dominant for the obvious economic and political reasons.” She continued that Beijing didn’t “want the North Koreans to cause more trouble than the system can absorb,” and noted that the grandfather and father of current leader Kim Jong-un had a “pretty good thing going” with the Chinese leadership, and coexisted without friction.

But when Kim Jong-un came to power in 2011, the relationship between the two traditional allies began to sour, she said. “So the new leadership [of Xi Jinping] basically calls him on the carpet.”

Clinton described Beijing’s growing frustration with Pyongyang for its pursuit of nuclear arsenal and, again taking the perspective of Beijing, went on to relay a warning to Kim: “Now, we don't care if you occasionally shoot off a missile. That's good. That upsets the Americans and causes them heartburn, but you can't keep going down a path that is unpredictable. We don't like that. That is not acceptable to us.”

Clinton’s speech for Goldman Sachs came four months after she stepped down as the top diplomat for the Obama administration and about two years before she declared her second failed bid for the presidency.

In another paid speech delivered for Goldman Sachs four months later, Clinton praised the U.S.’s commitment to South Korea and hailed its evolution into a democratic state after years of military government.

“South Korea has coups, have assassinations, have, you know, really terrible politics for a very long time. They didn’t become what we would consider a functional democracy overnight, but we never gave up. We had troops there, we had aid there, we had a presence of American business there. We were there for the long run.”