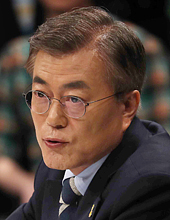 South Korea’s presidential front-runner Moon Jae-in warned Thursday that North Korea would face deeper isolation and a prolonged freeze in ties with Seoul if it carries out another nuclear test.

The remark appeared to send a signal to voters ahead of the May 9 election that even a liberal administration under the Democratic Party nominee would not tolerate bad behavior from the communist state.

“If North Korea carries out a sixth nuclear test, cross-border dialogue will be impossible for a time, and given the single, five-year term (of a president), it will effectively be difficult to improve inter-Korean ties under the next administration,” he said during a debate hosted by the Korea Broadcasting Journalists Club.

Tensions have been high amid signs North Korea was ready to conduct a nuclear or long-range missile test around the country’s key anniversaries this month.

Moon, the favored contender for the top office, has been regarded by conservatives as being soft on Pyongyang.

“I strongly warn (North Korea) that (a nuclear test) would bring isolation and difficulty upon itself, and threaten the maintenance of its regime,” he said.

“The first stage involves North Korea refraining from additional nuclear tests and the acceleration of its nuclear weapons program so that it is frozen and verified, and the second stage involves its complete dismantlement,” he said.

If Pyongyang is willing to negotiate its denuclearization, creating a mood for dialogue, South Korea could consider resuming joint projects including the now-suspended industrial complex in the North’s border city of Kaesong, he added.

Moon, who served as chief of staff to former President Roh Moo-hyun, recently came under fire over allegations the Roh administration consulted the North in 2007 before abstaining from a vote on a U.N. resolution condemning North Korea’s human rights situation.

“We did not notify the North of whether we would approve or abstain, but rather delivered our basic stance that inter-Korean relations would not be affected by the position we take,” he said. “It was a way of appeasing the North in case it protested afterward, and a sophisticated diplomatic move.”