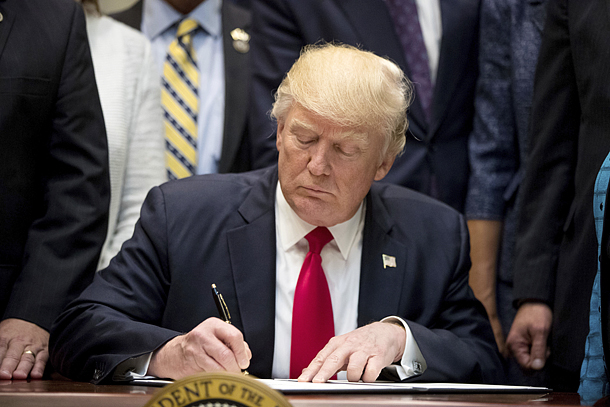 U.S. President Donald Trump and his top national security advisers briefed nearly the entire Senate Wednesday on the administration’s policy on North Korea, emphasizing pressure and diplomatic measures to return to some kind of dialogue.

Then his top aides moved to the Capitol to brief the House of Representatives.

It was a rare move for the president to summon all 100 senators to the White House, where U.S. Secretary of State Rex Tillerson, Secretary of Defense Jim Mattis, Director of National Intelligence Dan Coats and Chairman of the Joint Chiefs of Staff Gen. Joseph Dunford gave a classified briefing on strategy to denuclearize Pyongyang, which it calls “an urgent national security threat.”

The senators were bused to an auditorium at the Eisenhower Executive Office Building at the White House to attend the unusual joint briefing. Trump made an appearance for several minutes.

“The president’s approach aims to pressure North Korea into dismantling its nuclear, ballistic missile, and proliferation programs by tightening economic sanctions and pursuing diplomatic measures with allies and regional partners,” Tillerson, Mattis and Coats said in a joint statement afterward.

“We are engaging responsible members of the international community to increase pressure on the DPRK (Democratic People’s Republic of Korea) in order to convince the regime to de-escalate and return to the path of dialogue,” said the statement. “We will maintain our close coordination and cooperation with our allies, especially the Republic of Korea and Japan, as we work together to preserve stability and prosperity in the region.”

The statement also said that Washington seeks “stability and the peaceful denuclearization” of the Korean Peninsula and remains “open to negotiations towards that goal.” However, it is also “prepared to defend” itself and its allies.

The Trump administration seems to have initially settled on a strategy of maximum pressure and engagement while emphasizing that the era of Barack Obama’s “strategic patience” is over.

But some critics have found little difference between the two administrations’ approaches, especially after the briefing of the senators.

“We’re looking at a broad range of options, obviously, across all elements of national power and multinational power in connection with North Korea,” a senior White House official told reporters in a briefing about Trump’s 100 days since inauguration. “And so what the president has done is he’s made a decision for us to pursue a certain course.”

The administration official said that in addition to an “integrated effort to prioritize diplomatic” aspects, “What you’ll see soon is using the economic dimension of national power, as well as the military preparations that are underway.”

The official claimed that the Trump administration has a timeline on how to press North Korea, which will be “mainly events-driven,” depending on the “actions of North Korea” and “the actions of others whose help

Mark Toner, spokesman of the U.S. we’re looking for in resolving this problem,” without mentioning China by name.

The State Department said in a briefing Wednesday that getting all countries to comply with already-stringent existing sanctions is a means of putting greater pressure on North Korea, but that “there are other pressure points - isolation, diplomatic isolation being another one.”

Putting North Korea back on Washington’s state sponsors of terrorism list is another action the Trump administration has been prioritizing.

After the briefing, many senators said they were underwhelmed, and some Democrats said they learned nothing new about the administration’s approach on the North.

Sen. Tammy Duckworth, an Illinois Democrat, said on CNN’s “Anderson Cooper 360” later that day, “I did not see any new information coming out of that briefing at all,” calling the process a “dog and pony show.” She added that the four officials later came back with them to brief the House, and said according to the congressmen, “There was nothing new in their briefing either.”

Others found the briefing a detailed and thorough account of the Trump administration’s options when dealing with the Kim Jong-un regime.

“The military is obviously planning for a number of options, as they should - minimal military action to more significant action,” Sen. Ted Cruz told ABC, adding, “It’s of course the hope of the administration and Congress that military action isn’t necessary.”

Sen. Cory Gardner, a Republican of Colorado, chairman of the subcommittee on East Asia, told reporters it’s clear that the administration “is going to take more and more steps to pressure China” to get the results needed, “which is peaceful denuclearization.”

Analysts point out that the Kim Jong-un regime is unlikely to give up its nuclear program, though it may agree to a nuclear “cap” or freeze, which will make a return to dialogue difficult.

“The Trump administration, which is putting strong pressure on North Korea, will not negotiate with the regime simply on the condition of a nuclear freeze,” U.S. expert Kim Hyun-wook, a professor at the Korea National Diplomatic Academy, told the JoongAng Ilbo.

“Unless denuclearization is a precondition, Washington is not like to undertake negotiations.”