Thanks to fans, Sechskies is back : The first-generation boy group celebrates 20 years since their debut

Thanks to fans, Sechskies is back : The first-generation boy group celebrates 20 years since their debut 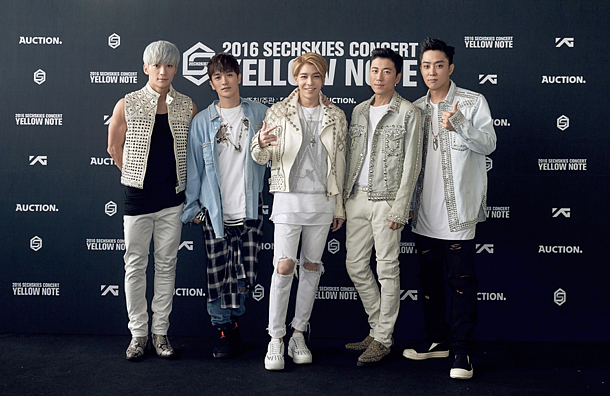 Sechskies pose for the press at the “2016 Sechskies Concert Yellow Note.” [JOONGANG ILBO]

Sechskies, a late 1990s idol group that is widely known as part of the first generation of idol stars in Korea, is celebrating its 20th anniversary of its debut this year. The group, which disbanded after three years together, made a comeback last year and saw its song “Three Words” top many music charts in Korea. The group’s concert was a sell-out as well.

Supported by the warm welcome from fans of all ages, Sechskies has decided to celebrate with a special album titled “The 20th Anniversary” and also hold an exhibition called “Yellow Universe,” which opened Friday, of each member’s belongings and stage outfits the members have worn in the past.

The five members sat down for an interview with media on Thursday to talk about their plans to celebrate the special year.

Q. What does it mean for the members that the group is celebrating its 20th anniversary since debuting ?

A. Kim: I think the 20th anniversary feels a bit different for us compared to other singers, since many of them may celebrate this mark having continued their career in the industry. But we [disbanded and] got back together, so I think it also means a lot for our fans.

Lee: The fans made this happen.

Jang: If there hadn’t been so much response last year with our comeback, we would not have been able to return as a group again. So we are very thankful to the fans.

Do the members rely on each other like the old days?

Kang: We lived those three years [in the industry] as if it was 30 years. I still have all the memories in my mind. We see each other’s facial expressions and we all know what each of us is thinking, like who’s angry and who wants to go home and who is spacing out. So we do rely on each other, and we look after one another while recording.

Eun: I have performed alone and as part of a group, so I probably know the best. I get energized just because I have team members. The biggest benefit here is that you can rely on others.

How do you keep yourself photogenic in front of the cameras while working with many young idol stars?

Kang: We don’t know how idol stars take care of themselves, but we just try to be ourselves.

Some keep a more regular lifestyle while others sleep during the day and work at night.

Jang: For us, having enough sleep is the biggest nutrition.

Kim: I think it has a lot to do with the agency, as its staff makes us look good .

Do you hope to get good reviews of your new songs?

Kang: It would be a lie if I said that we don’t have any expectations.

Eun: Since the chart is out there and we can see it, of course we care about it. But the ranking doesn’t go up itself so we need to put in effort and do things that the public may appreciate.

Does this mean that you will appear on entertainment shows?

Eun: We will both as a group and separately do TV shows.

Kang: We plan to do a performance on a music show like “Inkigayo.” We practice hard until after midnight these days. It will be fun when we are finally there, get on stage and actually perform our songs.