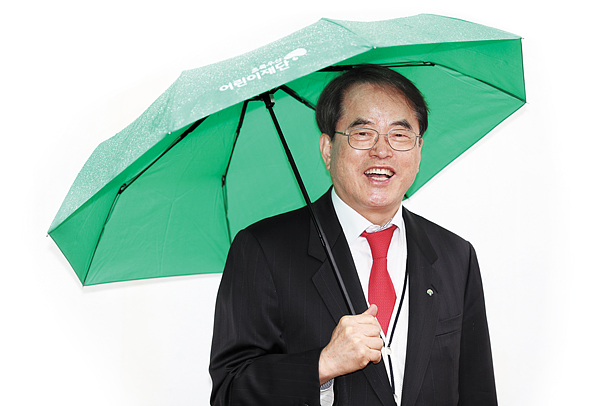 It’s a truism that children are our future. For Lee Je-hoon, it’s a principle guiding his life. The 77-year old has been CEO of ChildFund Korea, an organization specializing in children’s welfare, for the past seven years.

ChildFund Korea is trying something new ahead of the presidential election. The group recently solicited government policy suggestions from 8,600 children under 18. They may not be able to vote in the election, but they had plenty of suggestions for whomever wins: 11,300 were received.

“I have a hard time nowadays since I need to study too much,” wrote one. “I want the country to become crimeless,” wrote another.

“Children have become more economically stable than in the past,” Lee said. “But emotionally they are less stable.”

Lee is a professional journalist and once served as vice president of the Korea Newspapers Association. When he resigned from that association, he decided to dedicate his life to improving society. He became the CEO of ChildFund Korea in 2010 and the number of donors to the association has risen 400 percent since he took over.

Below are edited excerpts from an interview with the JoongAng Ilbo.

Q. In what ways are conditions for children in Korea deteriorating?

A. The biggest problem is that many children are feeling stressed. Parents cause the stress by forcing their kids to get into good schools and to get good grades. The world wants people who are creative but Korean students are not trained that way.

You emphasize the importance of a humanistic education.

People need to respect others. It’s a world in which many people are living together. In the past, children were able to learn those skills at their dinner tables, while living with grandparents, parents and siblings. But that is not the way nowadays. This is why we need good educations. Children need to learn how to respect others and be thankful. We started a campaign to have young students write thank you notes to their parents and teachers.

What is your main goal of this year?

We are running a total of seven children’s welfare centers across the country and we plan to give more support to not only local but also foreign children living here.

What was your most memorable event in the past seven years?

I get very happy when I hear stories of our supporters and how they helped children grow up. Park Sang-young won a gold medal in the men’s individual epee competition at the Rio de Janeiro Olympics last year. Park came to our banquet last September and said he was thankful for what I was doing. He handed me his gold medal, which I gave right back to him, and it was very meaningful moment.

What is the plan of ChildFund Korea from now on?

This year marks the 69th anniversary of our organization. We have always been focusing on one thing: representing children’s views and ideas in the world.