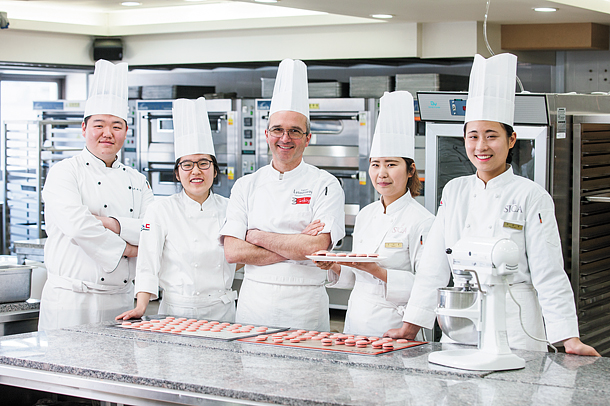 From this spring semester, Woosong Information College in Daejeon is offering the curriculum of the Institut National de la Boulangerie Pâtisserie (INBP), a world renowned baking institute. This is the first time that a college in Korea has offered the INBP’s pastry and chocolate course.

The institute, which is now one of the best public educational institutions for baking, was established in Upper Normandy in 1974 by La Confédération Nationale de la Boulangerie Pâtisserie Française, or National Confederation of French Pastry Bakeries. The institute hosts the French baking master contest with 16 baking masters and 40 professors, who teach about 8,000 students every year.

Woosong Information College signed a memorandum of understanding with the INBP last year, and began providing its curriculum to sophomores of majoring in baking. The students earn eight months (784 hours) of credit in three subjects: confectioneries, chocolates and pastries.

However, to obtain a bakery certificate, students must pass the same three tests given by INBP in France.

The college hired a French confectionery and baking master, Fabien Letourneau, as a professor, and spent 300 million won ($260,000) to purchase equipment and build a baking laboratory for the INBP’s course.

“Other colleges and academies have similar lessons once or twice per week, but our program give lessons for five days per week, so that the students get used to the basics,” Global Baking and Pastry Professor Kim Eun-ji said. “The emphasis is on basics in order to learn the techniques that produce uniform products at all times.”

“Knowing the basics gives the know-how to apply the skills,” Professor Letourneau said. “After obtaining their bakery certificates, students can work in confectioneries, bakeries and hotels around the world.”