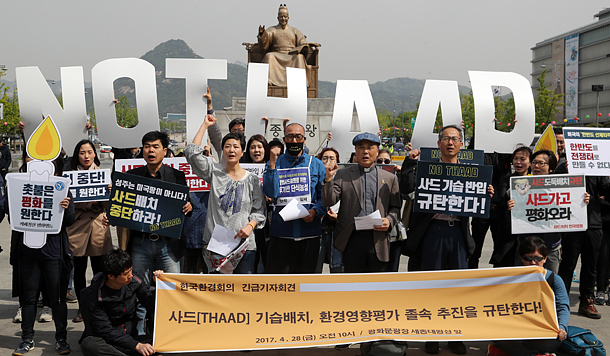 Activists gather at Gwanghwamun Square in central Seoul Friday to protest the unusually quick deployment of the Terminal High Altitude Area Defense battery in Seongju County, North Gyeongsang, without the completion of an environmental impact assessment, as U.S. President Donald Trump declared that Korea should pay for the antimissile system. [YONHAP]

U.S. President Donald Trump said he wants South Korea to pay the $1 billion cost of the deployment of a U.S.-led antimissile defense system here and that he may possibly terminate the U.S.-Korea FTA because of trade deficits.

Trump spoke with Reuters in his office on Thursday local time, just a day after key components of the Terminal High Altitude Area Defense [Thaad] battery were installed in the early morning hours of Wednesday on a golf course in Seongju County, North Gyeongsang.

The South Korean government said it was not informed of such intentions by the U.S. government before the interview and that nothing has changed in the terms of agreements in the bilateral Status of Forces Agreement (SOFA).

The SOFA, signed between the U.S. and Korean governments in 1966, governs the legal status of U.S. servicemen stationed here.

“The Liberty Korea Party and Bareun Party [comprising lawmakers from the former ruling Saenuri Party] and the Ministry of National Defense has been saying that the Thaad’s deployment and management will be paid for by the United States,” said Democratic Party Rep. Youn Kwan-suk, also communications director of the presidential campaign of Moon Jae-in. “If media reports are true, then it seems that the decision to deploy the Thaad system has been flawed from the beginning. The Defense Ministry and former ruling party must explain what kind of agreements were in place concerning Thaad, and all procedures to deploy the battery must be put to a stop until the next administration.”

Presidential front-runner Moon has been opposing the deployment of the U.S.-led antimissile defense system in Korea.

“The deployment and management of the Thaad system must be paid for by the U.S. government, as agreed upon initially between the two governments,” said People’s Party Rep. Son Kum-ju, chief spokesman of the presidential campaign of Ahn Cheol-soo. “But if there were disagreements on the bilateral agreement to deploy the defense system, the agreement must be tabled for approval at the National Assembly.”

The Park Geun-hye administration last July said the deployment requires no approval by the National Assembly, but liberal opposition parties that are against the placement said the matter should be deliberated and ratified by the lawmakers.

“The People’s Party also opposes renegotiating the Korea-U.S. FTA. It is only right that two countries stick to agreements they have reached together,” Son added.

Some lawmakers went so far as to request the cancellation of the agreement over Thaad.

“We would rather the U.S. government take back the Thaad battery if it’s going to make the South Korean government pay for it,” said Rep. Sim Sang-jeung of the Justice Party, also a candidate for the presidential election, in a campaign speech on Friday at Hongik University Station in western Seoul. “The South Korean people have not asked for Thaad.”

The deployment has been contested by residents of Seongju County, who are concerned about health and environmental effects of the electromagnetic waves emitted from the battery’s powerful AN/TPY-2 radar.

The radar and at least two missile launchers and interceptors of the Thaad battery were installed on the golf course in Seongju in the dead of night on Wednesday.

When the news leaked, some hundreds of residents and out-of-town protesters gathered at the town center of Soseong-ri, Chojeon-myeon, near the golf course.

Some 8,000 police were dispatched to the scene to guard the military trucks as they rolled in.

The deployment is not welcomed by Beijing and Moscow, who are concerned that the Thaad system will undermine their security interests. Beijing has been taking economic retaliation on Korea, including banning tour groups going to Korea. According to the Ministry of Culture, Sports and Tourism, the number of Chinese tourists to Korea dropped from some 600,000 in March 2016 to some 360,000 last month.

Trump also said he is de-facto announcing his intension to renegotiate or possibly terminate the Korea-U.S. FTA in the interview on Thursday.

“Very soon. I’m announcing it now,” he said when asked when he will announce his intention.

A U.S. trade representative foreign trade barriers report last month said the bilateral trade agreement has not only contributed to improvement in trade by both countries but also benefited American businesses.