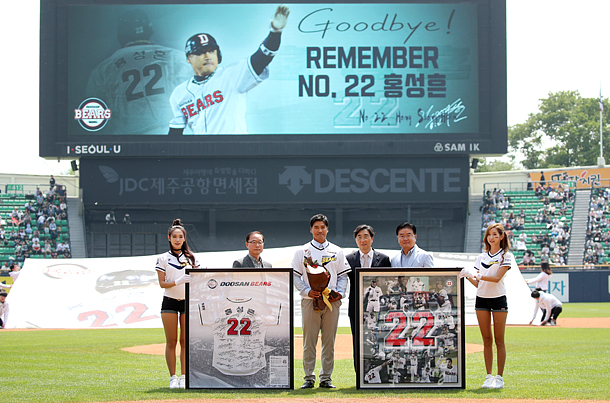 Hong Sung-heon of the Doosan Bears during his retirement ceremony at Jamsil Baseball Stadium in southern Seoul on Sunday. [YONHAP]

Hong Sung-heon, a catcher for the Korea Baseball Organization’s Doosan Bears, bid farewell to his fans with smiles and held back tears before a game against the Lotte Giants at Jamsil Baseball Stadium in southern Seoul on Sunday. 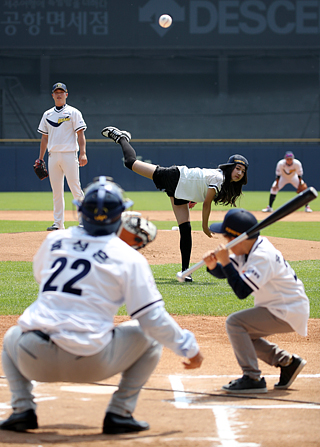 Hong’s daughter, Hong Hwa-ri, takes the mound as ceremonial first pitcher, while his son, Hong Hwa-cheol, plays as batter prior to the start of the game. The elder Hong is the catcher. [YONHAP]

Although Hong retired in November 2016 and is now training to be a coach in the American minor leagues under the San Diego Padres, his retirement ceremony was scheduled for Sunday’s game because he played for the Giants for four seasons from 2009 to 2012.

“I’m grateful for the Bears’ thoughtfulness,” Hong said in front of 25,000 spectators. “Since I played in other teams throughout my KBO career, I thought I wouldn’t be able to have a retirement ceremony.”

During the ceremony, Hong’s daughter, Hong Hwa-ri, and his son, Hong Hwa-cheol, appeared on the field as ceremonial first pitcher and batter, respectively. The elder Hong, of course, was the catcher.

Hong joined the Bears in 1999 as the team’s starting catcher and won the rookie of the year award. In 2006, he was part of the Korean national team at the World Baseball Classic, and in 2009, he signed with the Giants as a free agent. 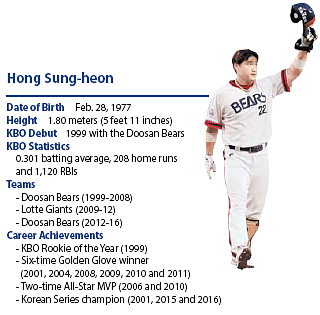 After four seasons, Hong returned to the Bears again in 2013 and retired in 2016.

“Of my personal records, 2,000 hits is the most meaningful to me,” Hong said. “Winning rookie of the year and the championship in 2001 and 2016 are also valuable to me. But I am most happy to receive so much love from fans throughout my career.”

Now, Hong’s dream is to become a major-league coach.

“I’m not a coach yet,” Hong admitted. “After training, I’ve been working hard on studying English. I want to become a passionate coach that runs with players on the field. Later in the future, I want to try to be a manager in the KBO.”

The Giants ended up defeating the Bears on Sunday 6-0.

With the win, the Giants have finally dug themselves out of their four-game losing streak against the Bears and are now ranked fifth in the KBO with 13 wins and 13 losses.