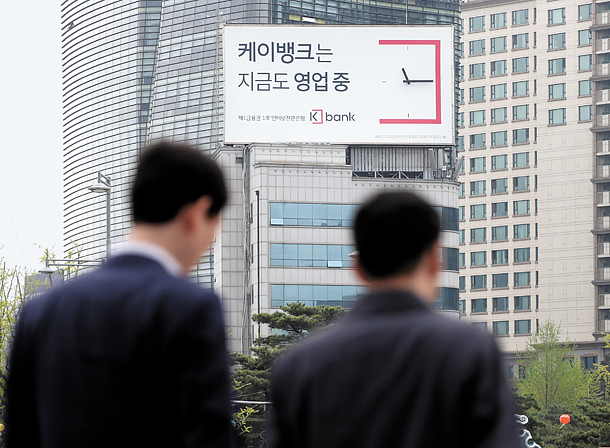 Mr. Park, a 30-year-old office worker in Seoul, spotted a MacBook he had been yearning to buy on sale at an online store for used products.

The vendor was asking a reasonable price - 1 million won ($879) - and said there were a handful of prospective buyers.

The problem was that Park did not have enough cash in his bank account. One option was to get a fast loan but it was Saturday and his bank was closed. 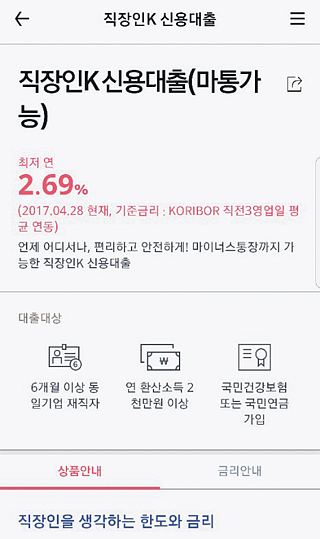 A K bank app that shows one of its loan products. [SCREEN CAPTURE]

Another option was a cash advance on his credit card, but the interest rate on that is hovering above 20 percent per annum.

Then Park got the idea of using K bank, Korea’s first internet-only bank. A few week earlier, he actually opened an account with K bank.

With just a few simple steps, Park opened a credit line that allowed him to borrow up to 23 million won at an interest rate of around 4 percent.

“I didn’t even have to input my employment details,” Park said. “The application somehow figured out where I work and what I did for living. The entire process of borrowing happened so fast.”

Less than a month has passed since K bank, Korea’s first and only internet-only bank so far, opened for business on April 3. It has attracted more than 240,000 customers who deposited nearly 300 billion won, according to the Financial Services Commission, the nation’s top financial regulatory agency.

The number of accounts opened with K Bank in a mere month far exceeds the total number of non-face-to-face account openings in the entire banking industry in Korea during the past year, which stands at around 155,000, the FSC said.

The influx of customers reached its peak on April 4, K bank’s second day of operations, when 38,000 customers opened accounts. After that, the average has been around 6,000 new customers per day.

Another testament to K bank’s business model - which is based on customers using smartphones rather than coming to a brick-and-mortar establishment - is when accounts were opened.

“About 2 out of every 5 customers of K bank, or 42 percent, opened accounts between 6 p.m. and 9 a.m., non-business hours for traditional brick-and-mortar banks,” explained an official from FSC. “About 41.9 percent of the deposits were made during those same hours and 40 percent of loans issuances.” 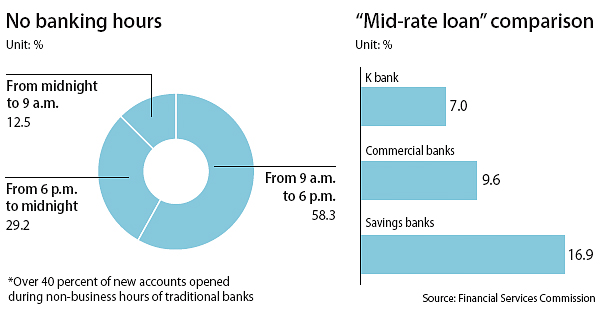 Some 186.5 billion in loans were extended as of April 26. The bank’s so-called “mid-rate loan” product, which is aimed at borrowers with credit scores from 4 to 7, had an average interest rate of 7 percent, lower than rates by local commercial banks or even so-called savings banks, which in Korea are actually consumer financing companies.

“A borrower who took out 10 million won with a savings bank at 16.9 percent would save about 1 million won in interest payments if he or she switches to K bank,” the FSC explained.

As a result, the birth of K bank has stirred up competition among local banks and forcing them to come up with loans with lower rates to stop an exodus of their customers.

“Once we have completed making policy changes, we will go to the second phase of our plan, which is to give additional approval to more internet-only banks,” the FSC said in a statement.

“When I first opened my account in early April, I didn’t have to wait long to reach customer service for verification,” said Park, who added that it took him just about 10 minutes to open the account initially. “But this time around, it took me 20 to 30 minutes for verification with the new phone. I don’t understand why it was even necessary since I went through the entire process when I opened my account a few weeks ago.”

Another customer of K bank said it is inconvenient that the bank doesn’t have its own ATM machines. “Yes, you can take out money from the machines at GS25 convenience stores,” the customer said. “But what about when you want to deposit cash into your account? I mean we do need to be able to cash out money as well as deposit it but it seems like K bank doesn’t really offer that service at the moment.”

K bank is partnering with GS25, one of its investors, to use its proprietary ATMs, which are linked to many banking systems. Normally a withdrawal at a GS25 incurs a commission but that is waived for K bank customers.

Mr. Kim, also a new K bank customer, said he was actually disqualified to take out loans from K bank.

“I have a steady job and get paid a decent salary,” said Kim, whose credit score stands at 4. 1 is the best score and 10 the worst.

“But somehow, I was rejected by the bank when I requested a loan. Isn’t K bank supposed to make it easier for people with credit scores not good enough to take out loans from commercial banks to borrow money at a reasonable rate?”