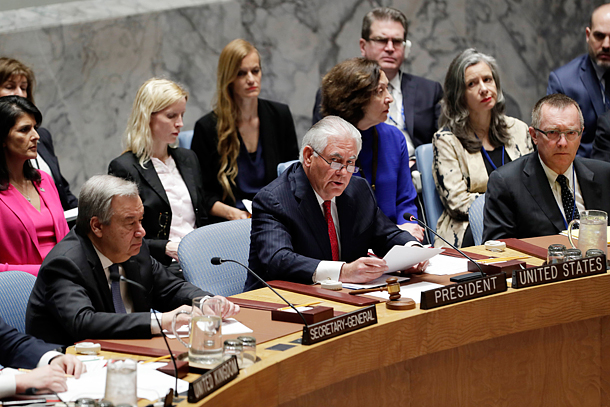 U.S. Secretary of State Rex Tillerson, center, chairs a ministerial meeting of the UN Security Council on the North Korean nuclear issue at the UN headquarters in New York Friday, calling upon member states to suspend or downgrade diplomatic relations with Pyongyang. U.S. President Donald Trump has been calling leaders of Southeast Asian countries to discuss cooperation on North Korea over the weekend. [XINHUA/YONHAP]

In Washington’s latest effort to contain North Korea, U.S. President Donald Trump began calling American allies in Southeast Asia over the weekend to make sure everyone was “on the same page” in dealing with Pyongyang, Reince Priebus, White House chief of staff, said during an interview Sunday on ABC News’ “This Week.”

The first call, with Philippine President Rodrigo Duterte on Saturday, was “all about North Korea,” Priebus told “This Week” host Jonathan Karl.

“The issues facing us developing out of North Korea are so serious that we need cooperation at some level with as many partners in the area as we can get to make sure we have our ducks in a row,” he said. “So if something does happen in North Korea, that we have everyone in line backing up a plan of action that many need to be put together with our partners in the area.”

Trump made similar calls on Sunday with the leaders of Thailand and Singapore, according to White House officials.

“Whether they’re good folks, bad folks, people that we wish would do better in their country, doesn’t matter,” Priebus said regarding the Southeast Asian leaders. “We have got to be on the same page.”

The call with Duterte came a day after U.S. Secretary of State Rex Tillerson chaired a UN Security Council ministers’ meeting on North Korea Friday in New York, where he asked world leaders to “suspend or downgrade diplomatic relations” with Pyongyang.

“North Korea exploits its diplomatic privileges to fund its illicit nuclear and missile technology programs,” Tillerson said, “and constraining its diplomatic activity will cut off a flow of needed resources.”

Tillerson urged member states to further isolate North Korea financially and warned that the United States would not hesitate to sanction third-country entities and individuals that support the North’s illegal activities.

In the same UN Security Council meeting, South Korean Foreign Affairs Minister Yun Byung-se said that if the North pursued another nuclear test or launched an intercontinental ballistic missile, world leaders would seriously have to consider whether the “serial offender” was qualified to be part of the UN, according to transcripts from the Ministry of Foreign Affairs.

Based on past experience, “dialogue for the sake of dialogue” is not an option for resolution on the North Korean nuclear issue, Yun said.
North Korea fired a ballistic missile off its east coast Saturday morning, nearly 12 hours before a U.S. Navy strike group led by the USS Carl Vinson was to enter Korea’s East Sea. But the test, the North’s sixth this year and third last month alone, ended in failure. The missile exploded minutes after liftoff.

Trump tweeted shortly after, “North Korea disrespected the wishes of China & its highly respected President when it launched, though unsuccessfully, a missile today. Bad!”

South Korea’s Joint Chiefs of Staff said the missile was fired from Pukchang in South Pyongan Province around 5:30 a.m. and reached a maximum height of 71 kilometers (44 miles) before “exploding in midair.”

South Korea’s military did not disclose any information on what the projectile was, but an unidentified U.S. official was quoted by the Associated Press as saying the missile was likely a medium-range KN-17 ballistic missile.

Newly coined by the Pentagon this year, a KN-17 missile refers to a single-stage, liquid-fueled Scud missile meant to target ships. It stands out from ordinary ballistic missiles in that the warhead is capable of searching for the precise location of a moving target and guiding itself towards it instead of dropping on the spot it was initially aimed at.

The North’s previous missile test on April 16 is also known to have been for a KN-17.

Pyongyang did not directly mention any missile test over the weekend but boasted through its state-run newspaper Rodong Sinmun on Saturday that it was capable of firing at American and South Korean military vessels training in nearby waters.

The “ultimate goal” of North Korea’s missile and nuclear development program, according to the Rodong Sinmun, is to target the U.S. mainland with a miniaturized nuclear weapon attached to an intercontinental ballistic missile.

South Korea’s military said the nuclear-powered USS Carl Vinson aircraft carrier was deployed to a joint naval exercise with the South Korean Navy on Saturday at 6 p.m. in the East Sea, adding that the drill was aimed at containing North Korean provocations and strengthening the alliance with Washington.

The joint military drills, known as Foal Eagle, wrapped up on Sunday after two months, but the Carl Vinson strike group will continue exercises with the South Korean Navy throughout next week, a local military official said on the condition of anonymity.

Pompeo will also likely speak with presidential candidates, local intelligence sources said, though specific plans have not been disclosed.