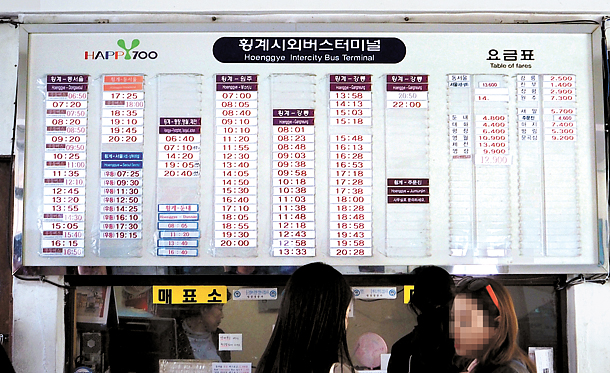 A timetable for the Hoenggye Intercity Bus Terminal in Pyeongchang County, Gangwon. There are only two lines running between Seoul and Hoenggye. The buses run hourly and make stops in places such as Jangpyeong and Jinbu. There is only one Hoenggye rural public bus line, which runs four times a day. Pyeongchang will host the Winter Olympics in February next year. [KIM WON]

“It’s very difficult to catch a cab in Pyeongchang. I’ve even walked for 40 minutes to get to my accommodations because there were no cabs. There’s no way it’ll be like this during the Olympics, right?”

This is what 43-year-old Matthieu complained to a journalist about attending the Olympic test events in March at Hoenggye Village, Pyeongchang County, Gangwon.

Other foreigners that visited the area for the events in February and March experienced similar frustrations due to inadequate transportation.

While there was a shuttle bus connecting hotels and the event locations, the means of transportation to and from bus terminals, restaurants and tourist areas were not up to task.

The opening and closing ceremonies of the 2018 PyeongChang Winter Olympics will be held at the Pyeongchang Alpensia Ski Resort near Hoenggye Village. Nearly half of the 102 events will be concentrated in Hoenggye.

However, taxis unexpectedly were the only means of transportation available because of a labor strike by public buses while the Olympic tests were in progress at Hoenggye Village.

The Gangwon provincial government anticipates more than 100,000 visitors will visit Pyeongchang and Gangneung on any given day during the Olympics. However, the transportation is a cause for concern.

According to the Olympic organizing committee, there were only 25 taxis registered in Hoenggye Village with 134 in operation in all of Pyeongchang County. In reality, there are even less, with 112 taxis on a given day, because of a six-day system that requires a day off per six days for drivers.

During the Olympic test events, taxis flew about struggling to bear the burden of carrying visitors and event officials. Even reserving cabs by phone was an impossible task.

“We are examining whether to repeal the taxi [system] and temporarily relax the designated area restrictions [for taxis],” said Kim Dong-hwan, an official for traffic management at the Gangwon Provincial Office.

In order to facilitate visitors, the provincial government is preparing to implement a transportation system connecting the Hoenggye bus terminal and KTX train station to the stadiums with shuttle buses. However, the means of transporting and connecting accommodations with major tourist areas are absent. Gangwon anticipates 576,000 people a day in the cities of the province.

The Seoul-to-Gangneung KTX train, which would allow a transit time of 1 hour and 10 minutes, is expected to be completed by December. The plan is for 51 trips and to transport 21,000 people a day.

Yet, there are no arrangements to connect or increase operating intercity buses or trains from metropolitan areas such as Seoul, Busan or Gwangju.

The intercity bus terminals in the region such as Hoenggye and Jinbu were, for the most part, constructed 40 to 50 years ago. The extent of the amenities available at the terminals are a convenience store and a coffee shop.

Interpretation services for foreign tourists in Pyeongchang is another pressing issue.

“Rio is a major city with serious traffic control. Mass transportation such as bus lines were well placed so there were no big issues,” said Yoo Jung-bok, head of the traffic management department at the Korea Transport Institute. “But the taxi drivers’ command of foreign languages were wanting so there were many cases where they couldn’t answer their passengers’ questions on destinations and travel stops. There were even instances of winding up at preposterous destinations due to mixing up destinations.”

In metropolitan areas including Seoul, telephone services for interpretation are available such as BBB - Before Babel Brigade, a volunteer interpretation group. Though there is a similar service offered in Gangwon, most aren’t aware of it.

“I communicated with difficulty with foreigners through body language during the test events. I wasn’t made aware of anything regarding an interpretation service,” taxi driver Kim Ik-rae said.

Intercity buses from the Dong Seoul and Nambu bus terminals in Seoul bound for Hoenggye pass through Jangpyeong and Jinbu.

“I only came to Pyeongchang knowing that there was a ski resort. However, the bus made stops in the middle,” said Sergei, a Russian tourist. “I was taken aback because I couldn’t communicate with the bus driver and because I didn’t know where I had to get off.”

Park Hong-sik, professor of local government administration at Gangneung-Wonju National University, said, “I expect that there will be no causes for concern in traveling to Gangwon as there is a high-speed rail line and highways between Seoul and Incheon International Airport. But I do anticipate much inconvenience in the region during the Olympics. Even if shuttle buses are used, the state of the counties such as Hoenggye is severe. Arranging for meticulous preparation and measures is urgent.”