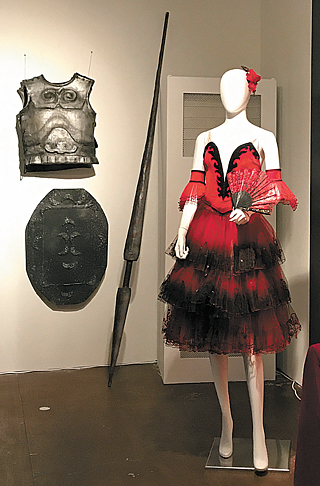 The Universal Ballet Company (UBC) has gathered its toe shoes, props, costumes, photographs and video clips of some of its most notable performances and is currently exhibiting them at the Nemo Gallery of the Blue Square in Hannam-dong, central Seoul.

Titled “Ballerina,” the exhibition, organized by Ilyoil Books, looks at the 33-year history of the UBC, which was established as the country’s very first private ballet company in 1984. The exhibition is divided into seven sections, focusing on UBC’s five most representative pieces in its repertoire - “Shim Chung,” “Giselle,” “Swan Lake,” “Sleeping Beauty” and “Don Quixote.”

“I believe it’s the first exhibition showcasing the history of a ballet company in Korea,” said Julia Moon, director of UBC. “When we first started 33 years ago, Korea was a ballet wasteland. But 33 years later, we are holding an exhibition on ballet. It definitely proves that ballet has become more popular in Korea.”

By taking a closer look at the costumes worn by UBC dancers, and offering interactive exhibits that allow visitors to try on toe shoes and tiaras in front of a large mirror, Moon says she hopes to bring ballet closer to the general public and encourage children dreaming of becoming a ballet dancer.