Negotiating on a global scale

Negotiating on a global scale 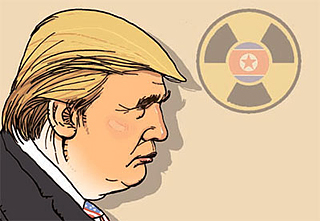 U.S. President Donald Trump’s strategic leverage to deal with North Korean nuclear and missile weapons program is China. He is right to claim Beijing has the leverage over Pyongyang as its longtime economic patron and is partly blamed for financing its weapons development and therefore should exercise more influence to make North Korea dismantle its nuclear weapons.

Former U.S. President George W. Bush came up with the idea. The strategy had a substantial outcome in its early stages. But the leverage effect waned as Washington became more preoccupied with engagements in Iraq and Afghanistan and lost its influence over Beijing as the Chinese economy grew at a staggering pace. The strategy weakened as soon as Bush announced that he would look to address North Korean issues through diplomatic means.

Trump revived the old strategy against a more powerful Beijing by using his image as a radical. He upped Washington’s strategy through his tough deal-making ways from his days in the real estate business. He declared he was staking his own and the U.S. reputation to solve the North Korean nuclear problem. He showed his muscle by dispatching large-scale strategic assets around the Korean Peninsula. Washington would be losing face if it does not make headway in denuclearizing North Korea. The U.S. diplomatic credentials as well as Trump’s name will hit the ground if the plan flounders.

Trump knows well that he cannot sustain the gains in his approval ratings through his decisive orders to bomb a Syrian air base after the use of chemical weapons. He publicly praised China for keeping its word not just for a show of approval but as a warning that he would put things on his own course if Beijing does not stick to its side of the bargain.

Giving an ultimatum underscores the show of will, which is crucial in deal-making negotiations. The opponent cannot dare to test the will of a contestant with a bigger force and determination. Thomas Schelling, an economist and Nobel laureate famous for applying game theory to nuclear strategy, suggested that one side in a negotiation can strengthen its position by narrowing its options. He argued that uncertain retaliation is more credible and more efficient than certain retaliation.

The credibility of a threat or promises aimed to change one’s action requires finding a way to prevent going back. If China wavers on its promise to pressure North Korea to give up its weapons program or does not draw the desired effect, Trump will face a heavy political blow. His strategy is to limit the option.

Trump’s shrewd deal-making raises both awe and concerns. He is dealing with socialist state leaders Xi Jinping and Kim Jong-un. He must be well acquainted with the nature and ways of socialist states and their leaders. He must firmly believe in free democracy principles and know the opposing ideology as well. Ronald Reagan was able to counter the Soviet Union because he was avid believer in moral and democratic principles.

A socialist state concentrates resources to achieve the direction set by the leader. Those following the state’s orders are good and those who are not are bad. There are no objective or permanent moral guidelines.

The Chinese government is comprised of descendents of Chinese military elites who invaded South Korea in the 1950s. We have painstakingly learned from armistice negotiations that the Communists cannot be trusted. They put off signing, frequently break their promises and interpret terms to their favor to discredit the agreement. Pyongyang has repeatedly showed that it cannot be trusted since the end of the war.

Trump, who was bred in the business realm where faith and commitment to ideology does not matter, could lose against communists. He could be dragged along by communists who do not keep to their word. There is also no guarantee that Trump would stay committed to North Korea if more urgent issues comes up. He could settle for a face-saving pullout.

This may be the last chance for us to reasonably denuclearize North Korea. We have always been weak on the North Korean issue. We would forever regret if we disagree with the U.S., yield to China’s threat, or leave ourselves at the mercy of North Korean hands.