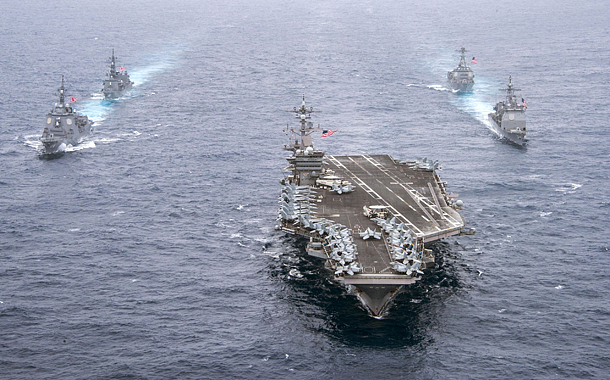 Before U.S. President Donald Trump mentioned billing Korea for the Terminal High-Altitude Area Defense system, there was another scare story going around Washington D.C. It was about how Trump may try to bill Korea for the services of the USS Carl Vinson and other naval assets.

Korea never asked for the Thaad battery to be deployed or the Carl Vinson to change course. The United States decided those matters. But Trump thinks otherwise. He claims that the country benefitting from the decision should pay. He is not convinced by the Thaad agreement or the argument that both the United States and Korea have gains.

Of course, we should not be stricken by his remarks. Not many of Trump’s words or tweets on foreign policy have actually materialized as fact. Frank Jannuzi, President of the Mansfield Foundation, advises people to ignore Trump as he almost always changes his positions after he learns something on the issue involved. Trump no longer accuses China of currency manipulation or threatens to impose a 45 percent tariff. He initially wanted to ignore the One China policy but learned his lesson after Xi Jinping cold-shouldered him for weeks. Now Trump doesn’t take phone calls from Taiwan’s president. He doesn’t talk about trade deficits and defense cost sharing with Japan. He had called NATO obsolete but now praises it as a strong alliance.

What we need to note is that Trump doesn’t change automatically. He doesn’t listen to advice from cabinet members or experts. Recently, a White House insider told me about Secretary of State Rex Tillerson’s briefing him on Turkey. Tillerson told Trump that Turkey was getting close with Russia, and the United States needed to act. But less than three minutes into the briefing, Trump stopped Tillerson and said that Turkish President Recep Tayyip Erdogan was powerful and suppressed a coup using Twitter. The briefing ended with Trump’s praise on Twitter.

In the end, the ones that keep Trump from saying unreasonable things are the heads of states.

Japanese Prime Minister Shinzo Abe charmed Trump by taking a low profile. In early February, Abe started a conversation by thanking Trump. When asked why, Abe said that he could save 100 million dollars in an F-35 fighter purchase, thanks to Trump’s deal making. Trump told Abe that he liked him. According to a Japanese source, Trump spoke ill of Barack Obama almost every 30 minute during a five-hour golf round the next day. Chinese President Xi Jinping convinced Trump with his serious attitude. His history lesson may have been a sham, but he certainly enlightened Trump. These days, Trump says he has “great respect” for Xi.

Only the power of trust between leaders can stop super-narcissist Trump. The next president’s first task is to inform Trump about Korea and convince him of the importance of the Korea-U.S. alliance so that he doesn’t say things that anger and worry Koreans. A lukewarm attitude would be the worst approach.

*The author is a Washington bureau chief of the JoongAng Ilbo.