Danger up his sleeve

Danger up his sleeve 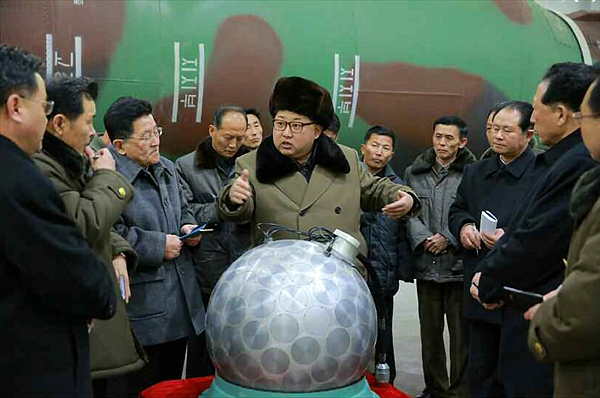 There are many kinds of nuclear weapons. Little Boy, the first nuclear weapon dropped in Hiroshima, Japan in 1945, was an atomic bomb. It contained 64 kilograms of Uranium-234 and the nuclear fission yielded 15 kilotons of TNT. Fat Man dropped over Nagasaki a few days later used Plutonium-239 instead of Uranium.

They are dirty bombs that result in a massive release of radioactivity. The hydrogen bomb developed in 1959 uses nuclear fusion rather than fission. It artificially recreates the process that occurs around the sun. The heat and pressure from a uranium-filled nuclear bomb turns hydrogen into helium. It is called a “clean bomb” as it releases less radioactivity.

A neutron bomb is a small yet deadly hydrogen bomb. While its blast is less than 10 percent of Little Boy, it yields biologically harmful neutrons. It may not affect buildings and tanks but can fatally hurt people inside.

While it is known to have been developed in the United States and the Soviet Union in the 1960s, its presence was officially confirmed as U.S. President Ronald Reagan announced the production of neutron bombs.

The opposite of a neutron bomb is an EMP nuclear bomb. It aims at disabling electronic devices rather than human casualties. The gamma ray in the explosion disables all electronic circuits in the area, not just mobile phones and televisions but also transformers and telephone lines. It can also affect cars with engines controlled by computers. It would be a mistake to think that the EMP bomb could not hurt or even kill people.

It takes years to restore the electricity grid and transportation after this kind of attack. If the food supply gets interrupted, many people will starve. It is a deadly weapon that slowly kills. When detonated in the atmosphere, it could paralyze a whole country.

He proposed that it could result in killing 90 percent of Americans. He warned that the Kim Jong-un regime’s obsession with nuclear weapons should not be taken lightly.

North Korea publicizes that it has developed an atomic bomb in a decade and has completed a hydrogen bomb. It has also test-launched vertical missiles. It is fulfilling the prerequisites for EMP bomb development.

Someday, Kim Jong-un may unveil it as a secret weapon. However, it is a threat that China and the United States cannot tolerate. It is not just having a few nuclear weapons for defense. What Kim Jong-un has up his sleeve could be the most self-destructive weapon.