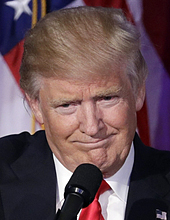 U.S. President Donald Trump said he would be "honored" to meet with Kim Jong-un if the circumstances were right, the first time he's given a green light to holding direct talks with the North Korean leader since assuming office.

Trump, however, did not spell out what those "right circumstances" would be.

"If it would be appropriate for me to meet with him," said Trump during an interview with Bloomberg News on Monday, "I would absolutely, I would be honored to do it."

Trump added, "Most political people would never say that, but I'm telling you under the right circumstances I would meet with him."
Later in a daily briefing, White House Press Secretary Sean Spicer said, "Clearly, conditions are not there right now.

If North Korea were ever serious about "completely dismantling its nuclear capability and taking away the threat they pose both to the region and to us," bilateral talks could occur, he continued.

Asked why Trump coined it an "honor" to meet with Kim, Spicer implied the president was acting out of diplomatic courtesy, saying, "I guess because he's still a head of state."

The expression had a "diplomatic" connotation, Spicer said.

North Korea, which usually makes public statements through its state-run Korean Central News Agency and the Rodong Sinmun, has yet to respond to the remarks. The South Korean government did not comment.

It's not the first time the Trump administration mentioned dialogue with North Korea. During an interview with National Public Radio last week, U.S. Secretary of State Rex Tillerson said the United States would "obviously" like to solve the denuclearization issue through direct talks.

The comment appeared to reflect the failed six-party talks involving the U.S., North Korea, South Korea, Japan, Russia and China, in which Pyongyang agreed in 2007 to shut down its nuclear facility in exchange for fuel aid, only to pull out of the agreement two years later and resume its nuclear enrichment program.

The six-party talks have been stalled ever since.