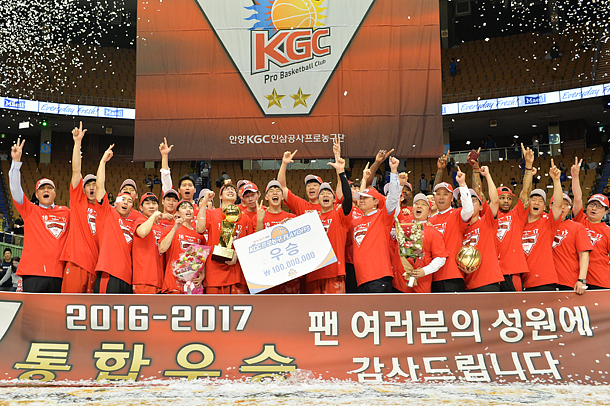 Anyang KGC celebrates after defeating the Seoul Samsung Thunders, 88-86, to win the playoff championship at Jamsil Arena on Tuesday. [KBL]

The Anyang KGC defeated Seoul Samsung Thunders 88-86 in the sixth playoff game to win the Korean Basketball League (KBL) championship at Jamsil Arena on Tuesday. This is the KGC’s first title in five years. For the first time in the team’s history they captured both the regular season and postseason titles.

Five years ago, the KGC played the Wonju Dongbu Promy, and just like they did against the Thunders, the championship came down to the sixth game in the best-of-seven series. Yang made the winning shot that led the KGC to its postseason victory.

“It’ll be very meaningful for us to win the postseason championship in our 30s,” Oh said prior to the game. “I want to celebrate our win with Hee-jong and Jung-hyun once again.”

The trio excelled throughout the game. The two teams were tied 86-86 in the fourth quarter with 5.7 seconds remaining.

But when Lee received a pass from Park Jae-han, he went through the Thunders’ defense and scored a goal at the close of the game.

Despite Yang’s low scoring average of 3.93 points in the regular season, he was the problem solver for the KGC in the championship game. Yang’s three-pointers exploded throughout the game - he successfully made eight out of nine of the shots. As captain, he encouraged the rest of the players throughout the games.

Oh, who scored 24 points, was selected as the postseason MVP, winning all of the league’s MVP awards. At crucial moments, he scored for KGC and blocked Ricardo Ratliffee, the Thunders’ main scorer.

“We were able to win with great teamwork,” Oh said.

During the postseason games, the trio went through a lot. Lee, who was the leading scorer in KBL’s regular season with 15.28 points, was booed by fans after his unsportsmanlike foul during the second playoff game against Lee Kwan-hee of the Thunders. Oh injured his left wrist during the fifth game so he had to tape it to play on Tuesday.

“It was a dramatic game,” Lee said. “I’ll never forget about this postseason championship.”

The foreign players helped too. David Simon suffered through an ankle injury but led the KGC’s offense, averaging 20.6 points. Though Keifer Sykes was absent from the last two games due to an ankle injury, Michael Taylor stepped in and scored 16 points.

Taylor joined the team temporarily, playing one game for 2.48 million won. He will receive a bonus since KGC won the championship.

“With the players’ experience and focus throughout the games, the KGC had the best strategies among the teams that won the postseason championships over the past seasons,” Kim Dong-gwang, MBC Sports Plus commentator, said.

The Thunders, who finished third in the regular season, were physically more tired than the KGC as they played in 10 games to get to the finals. KGC played just three to reach the playoffs.

“I spent the happiest season as the head coach,” Lee Sang-min, head coach of the Thunders, said. “I don’t have any regrets. We’ll try for the championship again next season.”