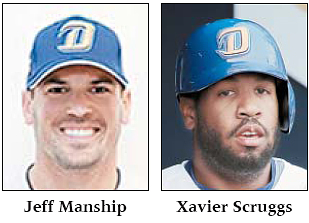 As the NC Dinos slowly make their way to the top of the Korea Baseball Organization (KBO) rankings, their scouting system for foreign players is receiving a lot of attention. Although Eric Thames left the Dinos to play in the major leagues, the team is having success with two new foreign players: Jeff Manship and Xavier Scruggs.

Manship, pitcher for the Dinos, has won all six of the games he’s pitched in this season. With six wins, he also became the first pitcher in 36 years of KBO history to win the opening six games in their first year. He had all six quality starts with an ERA of 1.69.

The Dinos took a risk in bringing in Manship, rather than continuing with Zach Stewart, who had 12 wins and eight losses with a 4.56 ERA. Since Manship, who previously played for the Cleveland Indians, had experience pitching in the World Series, the Dinos had to sign him for a higher price of 2 billion won ($1.7 million). Despite the concerns, Manship is playing above expectations.

Scruggs, who was added at first base to replace Thames, also stands out. The fans call him the “right-handed Thames,” with a 0.306 batting average with 10 home runs and 21 RBIs.

With the three foreign players leading the Dinos, the team is currently ranked second in the KBO, only 1.5-games behind the Kia Tigers.

In the 2015-16 season, the Dinos had the highest foreign player WAR statistics at 109.25 according to Statiz, the baseball statistics website. This year, they are ranked first again at 3.35.

“To analyze the players, we need standards,” said Lee Tae-il, president of the Dinos. “Our standards in drafting players are made through data analysis.”

Unlike the other teams, the Dinos’ data team drafts foreign players rather than the scout team.

“Instead of drafting outstanding players, we tried to select players that are least likely to fail,” Lim Sun-nam, chief of the Dinos’ data team, said. “We were also very lucky that they played well.”

The Dinos’ data team closely analyzes the record of about 100 players in the Minor League triple-A team and the major league.

In addition, they also take in consideration the opinions of the coaches and scouts.

“Our mission is to find the intersection between traditional scouting techniques and data analysis,” Lim said.

The Dinos haven’t always been successful with their foreign player selections. Adam Wilk, who recorded four wins and eight losses, struggled to adjust to Korea and the culture in 2013. He returned to the United States after just a year.

“From Adam’s case, we learned the importance of the players’ character and self-management,” Lee said. “Those factors were also heavily considered when we drafted Manship and Scruggs.”

Prior to the start of the season, Manship introduced himself to the Dinos’ staff and asked for a signed baseball from Lee Seung-yuop of the Samsung Lions, who will be retiring after this season.