Coexisting through light and color

Coexisting through light and color 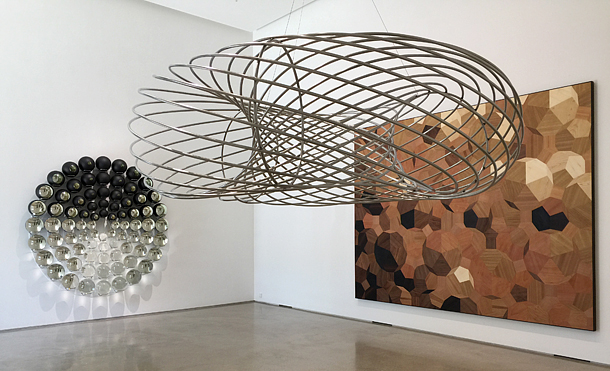 Olafur Eliasson, one of the world’s hottest artists, has come back to Korea with a small-scale solo show at PKM Gallery in central Seoul, just six months after his large solo exhibition at Leeum, Samsung Museum of Art that wowed Korean audiences.

In the new exhibition titled “Models for Coexistence,” the 50-year-old Danish-Icelandic artist presents seven works based on the concepts that he has held throughout his oeuvre - playful experiments with light and other natural elements, phenomenological thoughts on the diversity of human responses to those elements and an interest in the environment.

Among the four pieces created this year is an installation work titled, “The Exploration of the Center of the Sun.”

Powered by a solar panel installed on PKM Gallery’s rooftop garden, a light turns on inside a glass polyhedron hanging from the ceiling of a room on the gallery’s first floor. The light creates an ever-changing pattern of color and light on the walls and floor.

The artist also plays with light and color through one of his favorite mediums, mirrors, in pieces like “Midnight Sun” and “Visual Mediation.”

The exhibits also includes a rare painting by Eliasson, mainly known as an installation artist. But the painting is not flat, but rather a hemisphere painted in rainbow colors. “That’s my attempt to paint daylight,” said the artist at the gallery last month.

Emphasizing the democracy of art that allows the audiences’ diverse perceptions and feelings, he said “We live in a society where sameness is seen as success while difference is seen as threat… But we are in a space of art where we can be together but still be different.”

His thought about a peaceful coexistence will be also reflected in a work about refugees that he will show at the 57th Venice Biennale, which opens on May 13.