‘Do it’ show makes everyone an artist : Works recreated based on instructions makes exhibit both local and global

‘Do it’ show makes everyone an artist : Works recreated based on instructions makes exhibit both local and global 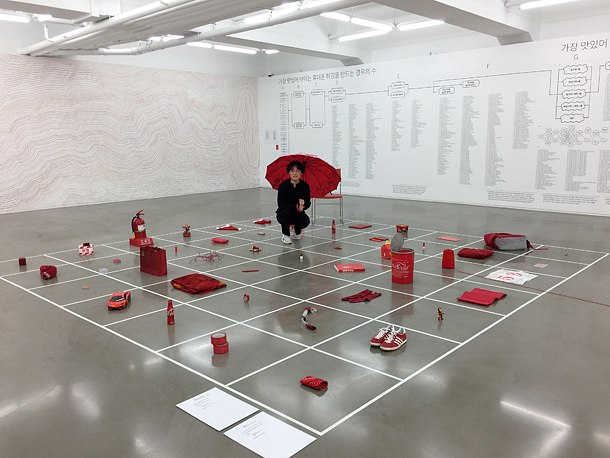 One of the members of “do it Builders,” a team made up of the general public for the “do it” exhibition, performs in the site-specific installation work that they have created “Homage to Each Red Thing” based on American artist Alison Knowles’s instructions. The “do it” exhibition conceived by the famous Swiss curator Hans Ulrich Obrist, recently began at the Ilmin Museum of Art in central Seoul. [MOON SO-YOUNG]

“Everyone is an artist.”

This iconic quote about contemporary art is from German artist Joseph Beuys, who was a comrade of Korean-born video art pioneer Nam June Paik in the Fluxus art movement of the 1960s.

A kind of do-it-yourself art exhibition to prove this, conceived by the famous Swiss curator Hans Ulrich Obrist, recently began at the Ilmin Museum of Art in central Seoul. Its title is “do it.” This is the 2017 Seoul version of the exhibition that has traveled to more than 50 different locations worldwide since it started in Paris in 1993.

Obrist, during a conversation with the artists Christian Boltanski and Bertrand Lavier, developed the idea of a flexible and open-ended exhibition format, based on the written instructions by artists, just like music performances based on scores by composers. Just as the same music piece is played differently at each performance, the instructions would be interpreted anew each time, and be visualized differently.

For this Seoul edition, not only established and emerging visual artists but also choreographers, a community of chefs, a sociologist and the general public have created works based on 44 of the 250 instructions accumulated through the exhibition’s travels.

The team made up of people from the general public called the “do it Builders” have created a site-specific installation work called “Homage to Each Red Thing” by putting various red everyday objects in the squares of a grid that they installed on the museum floor. The work is based on instructions from American artist Alison Knowles.

They also created an abstract painting with colored chalk on the floor according to American artist Joan Jonas’ instructions.

The participants also include established artists such as Hong Seung-hye, well known for her video art of slowly changing geometric forms and pictograms. She created another video piece by following the instructions of Danish-Icelandic artist Olafur Eliasson.

“All these works will be destroyed when the exhibition ends, so that the works should not be a fetish or a collectible piece on the art market,” said Cho Ju-hyun, curator of Ilmin Museum of Art. “It is one of the ‘game rules’ that Obrist set.”

The web site of the Independent Curators International in New York, which has supervised the exhibition, reads, “Each do it exhibition is uniquely site-specific because it engages the local community in a dialogue that responds to and adds a new set of instructions, while it remains global in the scope of its ever-expanding repertoire.”

In addition to the team of the people selected through the public invitation process, the exhibition is open to the wider public online (http://ilmin.org/do-it-2017-Seoul).

For example, there are English artist Simon Fujiwara’s instructions, which begins with, “Read the autobiography of a wealthier, more glamorous, sexier, more popular figure than yourself (preferably deceased). Attempt to impersonate that person in your daily life by acting out whole chapters of the biography and details of the life of this person within your mind…” Viewers are encouraged to create their own art pieces by following the instructions and uploading pictures of their work along with their name.