153 days without a leader

153 days without a leader 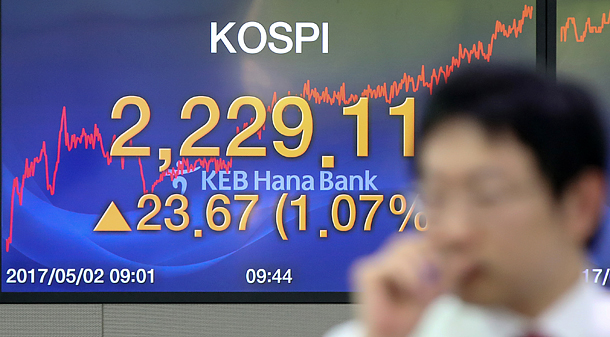 In a week, Korea will have a new president. The next president will be inaugurated 153 days after former President Park Geun-hye’s impeachment. In the meantime, various “bills” have piled up in the Blue House, half of which came from the United States and China.
There is an unexpected present in the pile of bills. It is the economic indicators. Despite the absence of leadership, the Korean economy has thrived. The growth rate in the first quarter was 0.9 percent from the previous quarter, far higher than the projection of 0.6 percent. Foreign investors are buying stocks and the Kospi is about to break the record high. The Bank of Korea, which habitually lowered the outlook on the growth rate, has slightly raised projections.

The present for the next president comes with a bonus. This year, more than 3 trillion won ($2.6 billion) more in tax revenue has been collected in January and February alone compared to the same period last year. The next president has secured emergency funds that would come in handy when needed. If he plans a supplementary budget in the first year, we can anticipate a fresh, new start of recovering a 3 percent growth rate.

Fortunately, officials have done the necessary homework, most notably settling the Daewoo Shipbuilding and Marine Engineering’s funding issue. Without the Blue House acting as a mediator, the course of reaching a conclusion was not as smooth as before. But interested parties had a chance to have sufficient discussion and mediated with one another under less political influence.

What is the message of the economy running smoothly in the absence of the president? An economy ministry official said, “The global economy is recovering, and the system supporting the Korean economy is working well.” Yet, the former presidents who called themselves “economy presidents” and micromanaged every single issue should learn a lesson. It has been proven that at least short-term economic indicators are not much related to the presidency.

It is not that the president is irrelevant. The experience of 153 days without a president ironically shows what the new president needs to focus on. There are certainly jobs that have stopped or regressed since December, such as public services and labor reform, establishment of trust funds through social integration, alleviation of geopolitical risks and responses on the low fertility rate. These are tasks associated with the fundamentals of the Korean economy, but these long-term tasks require political leadership and drive that working-level officials cannot take on.

In the presidential campaign, each candidate presented economic pledges with specific and short-term goals. If elected, the next president needs to entrust them to the officials and focus on “presidential tasks.” Just as the predecessors proved with their devastating failures, a five-year term is not very long.

*The author is a deputy economic and industrial news editor of JTBC.