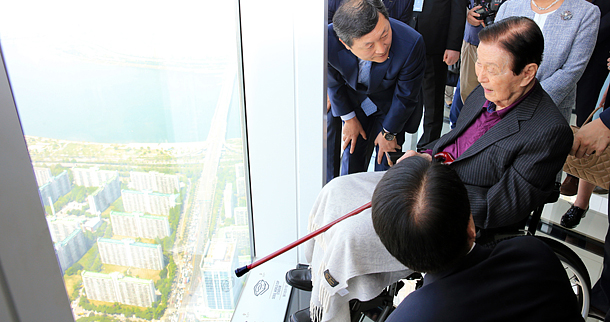 Lotte founder Shin Kyuk-ho, center, looking out from Lotte World Tower on Wednesday. It was his first visit to the skyscrapper since it was opened in April. [LOTTE GROUP]

Lotte Group founder Shin Kyuk-ho made a surprise visit to Lotte World Tower on Wednesday, taking a look at the 123-story skyscraper that he began building 30 years ago. It was his first visit since the tower opened April 3.

The 95-year-old founder was accompanied by his wife Hatsuko Shigemitsu and eldest son Shin Dong-joo on Wednesday. Shin Dong-bin, the second son and the chairman of Lotte Group, is on a U.S. business trip.

Shin Kyuk-ho stayed inside the tower for three hours, visiting Seoul Sky, an observatory that starts on the 117th floor and its six-star hotel Signiel Seoul, the company said.

Executives of Lotte affiliates, including Park Hyun-chul, CEO of Lotte Corp., which was in charge of the skyscraper construction and Park Dong-ki, CEO of Lotte World Adventure showed Shin Kyuk-ho around.

“I felt sorry that I couldn’t get to see him on the opening day,” said Park. “But finally I could greet him today.”

Lotte World Tower has been a project for Shin since he bought the site in Jamsil, southern Seoul, in 1987 and set his sights on building the country’s tallest landmark. The deterioration of his health and the family feud that resulted in Shin Dong-bin taking control of Lotte’s Korean business prevented Shin Kyuk-ho from visiting earlier.