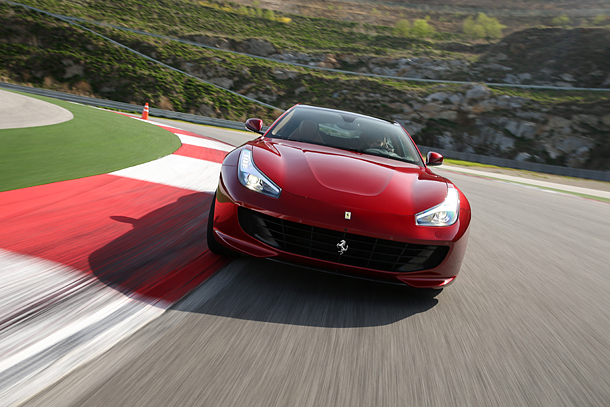 A Ferrari GTC4Lusso T, released in Korea in February, out on a test drive at Inje Speedium, a race track in Inje, Gangwon. The new four-seater offers a family-friendly driving experience, while living up to the sports car’s old reputation. [FORZA MOTORS KOREA]

A sports car on the road near Gangnam station, southern Seoul, with a loud exhaust system may leave passersby in awe but driving the vehicle is less than practical in a congested and heavily populated city such as Seoul.

After all, how can a high-end supercar show what it is made of when drivers cannot speed on open roads?

That might be the case for most supercars but not for the new Ferrari GTC4Lusso T, the latest addition to the Italian sports car maker’s local lineup and a model fit for everyday driving. When the Korea JoongAng Daily took it for a spin at Inje Speedium, a race circuit in Inje, Gangwon, a reporter discovered that the GTC4Lusso T covers a wide spectrum of driving experiences - family-oriented while not lacking in the components necessary to live up to the reputation of the Ferrari brand.

Most Koreans think of two-seater models such as the 488GTB when they picture the Ferrari. But the GTC4Lusso T, which landed in Korea in February, is a four-seater coupe and can accommodate a family of four comfortably, a trait common for other brands but not among Ferraris. 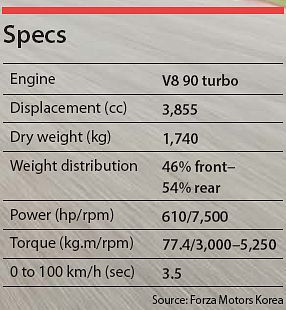 To be fair, Ferrari has been making 2+2s since the 1960s. However, they never got as much attention as two-seaters.

When GTC4Lusso, the older brother of GTC4Lusso T, first showed its face in March 2016 during the Geneva Motor Show, the new four-seat grand tourer has been revamped from its predecessor FF enough to gain a new name.

For instance, the new V12 engine could generate 680 horsepower, up 29 compared to FF and comes with an improved four-wheel steering system. A few months later came the GTCLusso T, showcased during the Paris Motor Show. It was downsized as the first Ferrari four-seater with a V8 engine.

It is about 50 kilograms (110 pounds) lighter than its older sibling and with less power at 610 horsepower, meaning it is that much more agile. The sound of the engine also differs drastically while in high and low RPM - much quieter at low speeds, traits ideal for everyday driving in urban settings with children in the back.

After experiencing a supercar for the first time with California T on a windy day, this reporter stepped inside the GTC4Lusso while still feeling a rush of adrenaline.

The first thing noticeable was that both front and rear seats were bucket seats, which meant rear seats also guaranteed more stability in extreme driving conditions. Along with rear seats that sit higher than the front, the panoramic glass rooftop guaranteed passengers in the back a wider view of their surroundings, another aspect of the vehicle that Forza Motors Korea, Ferrari’s local dealer, didn’t fail to emphasize during the briefing.

“Such details make it a family-friendly car and multipurpose vehicle fit for everyday usage,” said a technician from FMK.

Taking the driver’s seat, it didn’t take long to notice the differences from the California T.

It was difficult to maneuver the California in near-90-degree corners following the homestretch, which forced the speed down from near 200 kilometers (124 miles) per hour to less than 100. But with GTC4Lusso T, topped with “rear-wheel-steering system,” a system that calibrates the back wheels in line with the front wheels on a corner, driving through the turn was easier. “When at low speeds, four-wheel steering allows immediate response in cornering but at high speeds, [rear-wheel-steering system] allows faster and more controlled entering and exiting of corners,” the FMK technician explained.

Variable boost management system of the new T also made speeding and slowing down more accommodating for an amateur driver. With the help of these systems topped inside the car, the reporter was able to maneuver the vehicle closer to the near side of the track while turning the corners compared to the California.

Still, while Ferrari promotes the new GTC4Lusso T as a family-friendly and everyday vehicle, it comes with a hefty price tag that starts at 350 million won ($309,000) in Korea, which means it can go well above 400 million won with various options.