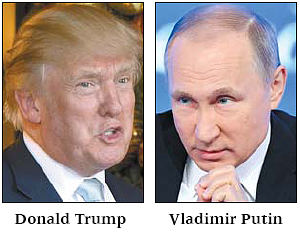 U.S. President Donald Trump and Russian leader Vladimir Putin discussed over the phone deescalating tension on the Korean Peninsula Tuesday, following the American leader’s puzzling remark that he would be “honored” to meet with North Korean leader Kim Jong-un.

It was the two leaders’ first conversation since Washington launched 59 Tomahawk cruise missiles at an air base in Syria last month, an order which came during Trump’s summit with Chinese President Xi Jinping, during which he pressured Beijing to do all it can to rein in Pyongyang.

The White House said in a statement that Trump and Putin agreed to end the suffering and violence in Syria and to work together to eradicate terrorism throughout the Middle East. It added the two also “spoke about how best to resolve the very dangerous situation in North Korea.”

The Kremlin similarly stated, “The dangerous situation on the Korean Peninsula was discussed in detail,” adding Putin “called for restraint and for the level of tension to be reduced.”

U.S. Secretary of State Rex Tillerson has condemned Russia for supporting the Assad regime, adding it is not in Moscow’s interest to support a reign “coming to an end,” in similar language the Trump administration has taken to pressure China to do more on North Korea.

The Trump administration is taking on a strategy of maximum pressure and possible engagement toward North Korea and has recently toned down rhetoric suggesting military action or a preemptive strike. In the past week Trump has made phone calls to leaders of Southeast Asian countries including Philippine President Rodrigo Duterte seeking some sort of consensus on the North Korea issue.

In an address at a UN Security Council foreign ministerial meeting on North Korea last Friday, Tillerson said that North Korea “must take concrete steps to reduce the threat that its illegal weapons programs pose to the United States and our allies before we can ever consider talks.”

He warned the 15-member council, “Failing to act now on the most pressing security issue in the world may bring catastrophic consequences.”

Russian Deputy Foreign Minister Gennady Gatilov, rejecting a military option, told the council that China’s proposals to restart talks with North Korea should be seriously examined and that sanctions alone would not work.

Trump told Bloomberg News on Monday he would be “honored” to meet with Kim Jong-un “under the right circumstances.” This was the first time Trump indicated he is up for holding direct talks with the North Korean leader since assuming office, though as a presidential candidate last year he had offered to hold talks with Kim over hamburgers.

Trump also called Kim a “pretty smart cookie” on CBS’ “Face the Nation” Sunday, for assuming power at a young age and retaining it.

U.S. congressmen and Washington heavyweights expressed skepticism and even alarm over Trump seemingly praising and expressing empathy for the North Korean dictator.

Rep. Ed Royce, a Republican from California and chairman of the House Foreign Affairs Committee, said that the right circumstance for talks with Kim Jong-un would be when the regime stops its nuclear weapons program and the North Korean leader changes the way he treats his people.

“Now is not the time for those discussions,” Royce told reporters in Washington after receiving the Order of Diplomatic Service Merit, Gwanghwa Medal 1st Class, from the South Korean government Tuesday for his contributions to strengthening relations between Seoul and Washington. He emphasized now is the time to “work with Beijing and the rest of the international community in order to put pressure on North Korea to stop its nuclear weapons program.”

Democratic presidential candidate and former Secretary of State Hillary Clinton said at a Women for Women International luncheon in New York Tuesday, “Negotiations [on the North Korea issue] are critical; but they have to be part of a broader strategy, not just thrown off on a tweet some morning.”

But others have praised Trump’s “carrot and stick” diplomacy, offering Kim Jong-un a possible summit under certain conditions while reminding the regime Washington is ready to take military action against Pyongyang.

Rep. Adam Kinzinger, a Republican from Illinois on the House Foreign Affairs Committee, told Fox News Monday, “It’s going to be a very long process, but this is how you do diplomacy.”

He said Trump’s stick were the U.S. aircraft carriers, American troops in Korea and Japan, the deployment of the Terminal High-Altitude Area Defense, or Thaad, system, and Washington’s readiness to take military action, while the carrot is Trump being “willing to meet with the dictator in order to try to get some kind of solution.”

“When the time is right for talks, we’ll do it,” said Kinzinger. “That time’s not now, and we have to see willingness from North Korea to be willing to give up their nuclear weapons or else we’re going to continue down this path.”

Trump’s top national security advisers briefed the U.S. Senate and House last week on the administration’s policy of emphasizing pressure on North Korea to return to some kind of dialogue.

But Seoul officials point out a return to dialogue is not so simple. They say if Pyongyang declares a cap or freeze to its nuclear program, that would not be enough to convince Washington to talk.

The issue remains how to confirm whether the North is serious about denuclearization.

South Korean Minister of Foreign Affairs Yun Byung-se told reporters on Monday, “While there is a tendency to look at all dialogues in the same light, dialogue to President Trump is not a means to manage a situation but rather a means to solve the problem.”

Some experts point out North Korea can show “concrete steps” toward denuclearization through a verifiable nuclear freeze, such as revealing all its secret nuclear development activities in addition to its main Yongbyon nuclear facility and allowing full inspection by an International Atomic Energy Agency (IAEA) team.

However, Pyongyang probably won’t agree to such terms. North Korea expelled all IAEA inspectors in 2009.

A South Korean diplomatic source said, “Even the U.S. soft-liners who call for the resumption of dialogue through an initial nuclear freeze have different opinions on the issue of what to freeze and how to freeze it, so there is no solution.”

“Resuming dialogue on the precondition of denuclearization, and through that implementing a nuclear freeze, was already negotiated in the Sept. 19, 2005 joint statement, but since then North Korea’s nuclear capabilities have become so advanced, the situation has become more complicated,” said another Seoul government official, referring to the agreement signed after a fourth round of six-party talks involving the two Koreas, China, Japan, Russia and the United States, in which Pyongyang was promised economic aid and energy assistance in exchange for its abandonment of its nuclear weapons and existing nuclear programs.

“We are not able to accurately confirm how much highly enriched uranium (HEU) the North possesses, nor where it is located. And there is nothing decided between Seoul and Washington, and the other members of the six-party talks, on whether dialogue will be resumed to discuss the process of how to achieve such nuclear freeze, or whether North Korea would have to have undertaken measures to achieve a certain level of nuclear freeze in order to return to the table for talks.”

Another government official pointed out, “The Trump administration, through its review of its North Korea policy, saw failure in past policies in which humanitarian aid was provided to North Korea before it showed action, after which its attitude changed and everything went down the drain. Washington declared its intention not to repeat the failure of the past 20 years, including strategic patience, so it will put emphasis on Pyongyang showing verifiable actions first.”

Matt Pottinger, senior director for Asian affairs of the White House National Security Council (NSC), pointed out that Pyongyang wants to use its nuclear weapons “as an instrument of blackmail to achieve other goals, even including perhaps coercive reunification of the Korean Peninsula one day.”

He added, “We really have no choice but to increase pressure on North Korea, diplomatically isolate them, to bring greater economic pain to bear until they are willing to make concrete steps to start reducing that threat.”